People are weird. Recently I came to know that there are sick people out there who now sell harnesses for hamsters. Why hamsters need a harness is beyond me, for I don’t think a hamster needs to be walked. Ever.
This story came to light when Aunt Antsy told me of an incident about her colleagues who bought a hamster leash for their hamsters. They wanted to try on Kelpie, Aunt Antsy’s hammie.  When they propositioned the idea, she told them that if they weren’t afraid of being bitten, they can try. She had expected them to desist as Kelpie has bitten all of them before. Apparently quite badly too.

The story went that one of her colleague had picked Kelpie up, held her very tightly to prevent her from biting him and then tried to put the teeny-weeny hamster harness on her. He squeezed her so tight, her already protruding eyes were practically bulging from her eye sockets. She felt kelpie’s pain and so after 3-5secs, she very nicely asked them to return Kelpie to her. Poor Kelpie! Aunt Antsy spent her whole weekend fretting that Kelpie she might die of internal injury from being squeezed so hard. [Kelpie pulled through, though]

Aunt Antsy, being Aunt Antsy then made the picture below in light of the hamster harness incident and sent it to me. Apparently, she was very close to printing a copy and sticking it in her cubicle. I told her she should. Hamster leash does sound ridiculous. Some human being really have no empathy for animals!.

I thought Kelpie looks all too cute. besides, I support her cause and so, and I can’t help but post Aunt Antsy’s handiwork. 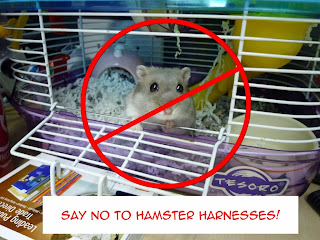