There is something VERY wrong about this image here, and I do find it to be extremely disturbing! 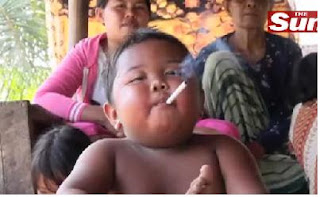 Click here for the video
One thing is very clear to me: The parents of this 2 year-old boy ought to be shot for condoning such habits in a little kid. News has it that this little brat would also demand for coffee along with his cigarettes.Now, why any parents would even think of giving in to such nonsensical demand is beyond me. When I saw the interview on TV, the parents sounded very nonchalant about it. I remember the Mom lamenting that there is nothing she can do as he demands for it. Gee! How about just ignoring him and send him to bed instead? Or even better, just give him a little back-hand swat on the head?
How these people become parents are beyond me.Instead of strictly enforcing discipline, they just give in and then they blame the child for such behaviour? For crying out loud, this fatty-bom–bom is probably still wearing diapers. The only reason he is pushing his luck is because he is getting his way! And as to why he wants a cigarette?  Gee! I wonder if Daddy has been showing exemplary example with his own behaviour and mannerism? In fact, all this fatty-bom–bom is trying to do is just emulate his father’s behavior so he feels like a man.
Talk about responsible parenting. Thanks to these people, we will be harbouring screw-up kids for the next few generations.