Past the 3 year mark, my old Sony Ericsson T700 phone has been showing signs of a slow death. In the last 2 months or so, the phone has been Spud’s object of affection day in, day out, as she gets intrigue by the buttons and the sounds the phone can emit. That being said, she has got no qualms throwing the phone around; and as it landed on the floor, the phone disintegrated into several piece – namely the battery, the back cover and the phone itself.

Over several weeks then on, the phone will switch off by itself, sometimes just hanged and other times the cover kept falling off the phone as the locking system is no longer in working order. I have been in inertia for the longest time in acquiring smart phones, just because I have so resisted it. I know for a fact that out of principle, iPhone or Blackberry is out of my consideration set, and it makes it harder that I don’t have a brand in mind because I know almost nothing about what makes a good smart phone.

It was a matter of time, and I don’t want to be caught in a situation where it will die on me when I did not even have a replacement yet. I guess, I could have gone for another simple phone, but I also realise that it is about time to get on the bandwagon…It was time for the imminent replacement.

Last week, we (by we, I meant Silver Bullet) spent a great deal of time researching for a smart phone since (luckily for me!), Silver Bullet also needed to replace his phone as it has got quite a crack for the phone to be broken in two!

In all honesty, I really was too lazy to go look for one given my massive inertia to succumb to one, and I cannot tell you how happy I was to be riding on Silver Bullet for the knowledge into the world of smart phones. While I know what I DO NOT WANT (i.e iPhone or Blackberry!), it was still a bummer that I had to decide for a brand myself. Hmmph. 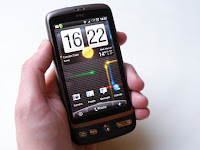 After all that research and spending half the day literally trawling the stores to look for a smart phone, Silver Bullet decided on a HTC Desire – actually, given the feature, a brand I would not mind getting for myself

Unfortunately, given this is Thailand, some inconsistencies exist. It turned out that because I use AIS as my provider, I would need a smart phone with a 900 MHz bandwidth and HTC Desire only comes in with a 850 MHz bandwidth (only supported by DTAC). Tell me how retarded is that!

Funnily enough, I was told that the 900 MHz were all sold out; 2 hours and 5 shops later, we realized that that in fact, none of HTC smart phones came with a 900 MHz! And the only reason we found that out was because we had asked if it was possible for me to order it! Now why they told me “sold out” instead of “no have” is beyond me! Fed-up and tired, I moved on to the next brand I had in mind – the Sony Ericsson xPeria – only to be told at several shops again that they were sold out. Indefinitely.

I quit the search for the day, and decided to do a little bit of research from what I knew. With the knowledge of the limited smart phone brands I can use with AIS, I decided on Samsung Galaxy S and promptly bought it the next day.

I wish I know everything about it within 5 minutes as if there’s one thing I don’t have the patience for, I don’t have the patience to spend time (a luxury of time I don’t have!) figuring out what to do with it. With my impending impatience, Silver Bullet came to my rescue and with his help I managed to figure out several things here and there within a shorter span of time. (Is there a wonder why I nicknamed him Silver Bullet? :p)

Perhaps when I get the ‘smarts”, I may just be inclined to do a review of HTC Desire vs Samsung Galaxy S. But then again, why would I do that when there are already so many reviews out there?

Besides, by the time I get down to it, these models we have may have just been obsolete.

The only thing I can comment at present is the fact that I don’t like how much bigger than mobile phones used to be, and the annoying fact that I have to use 2 hands to work on it; left hand to hold it, and the other to touch-screen it.

All in all, I am still figuring it out and I am no means an expert of smart phone But I guess, I now have officially crossed over to the dark side.

Unlike SilverBullet who is now royally addicted to Angry Birds, I still have not downloaded those crazy games.