It was requested that Spud needs to be more “accessible” to her grandparents when they left for Holland last weekend through Skype. Skeptical that Spud was unlikely to be interacting with them much given the “ants she usually tend to have in her pants”, we warned  them of the potential outcome and adopted the let’s-try-it-out-and-do-a-wait-and-see approach.

Spud surprised us. There was an instant recognition the moment she saw them appearing on Skype. She was smiling , jumping and acting all excited. We reckon, it helped that the skyping happened quickly enough after they had left our crib, and so that helped with Spud’s instant recognition.

At one point, Spud kept trying to get to the back of the laptop – I reckon she probably thought that she can find her grandparents behind that screen! It was quite hilarious to watch her, as she not only interacted happily with them, she was even trying to hand toys over to them!

It was a very pleasant day for us. She was smiling, she was laughing, she was giving flying kisses and all sorts of antics that made me laugh in the background….but at the same time, felt almost sad that while the interaction was happening, there was no chance of physical contact at that point in time.

I can imagine that if I am on the “other side”, my heart would ache for not being able to kiss and cuddle her. So close…yet so far away…

On the hind-sight, though, at least that is better than nothing. And I guess, the real challenge is being able to keep this us. Not only for Silver Bullet’s parents in Holland, but for mine as well in the not-so-faraway island of Singapore! 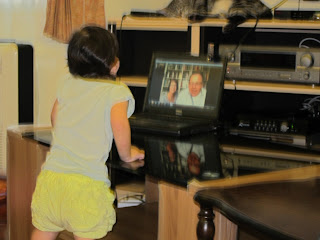 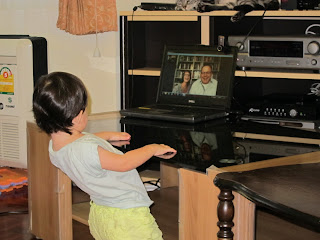 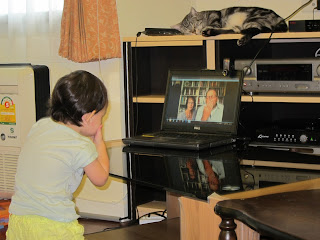 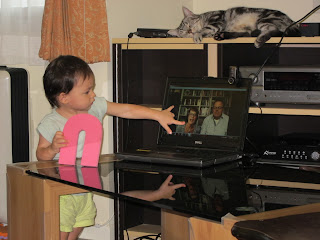 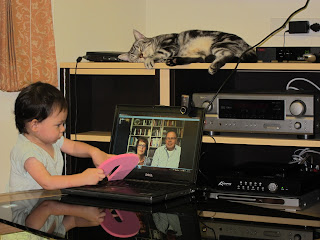