Ahhh…! Two months. And they say this is when many babies peak in their crying episodes…

Or is it?
Because, between Squirt and his reflux, there is no telling; although I have noticed of late that he may have subscribed to the “witching hour” between 5pm to 7.30 pm every day. He is also sleeping less during the day, and does not go down for naps as easily – a sign of more exciting things to come!
He seems like a big boy though. He is all poofed-up, his cheeks are filling out nicely and I feel my hands cramping up after cradling him for more than 15 minutes.
His eyelashes, which were non-existent at birth, are growing out and getting longer; his eye brows more visible. Perhaps, the most prominent feature of all at this point is his spiky hedgehog hair at the top of his head! (I have a good mind to shave his head all bald)
When not pained by his reflux, he seems like a very chilled baby.
Squirt has been very generous with his smiles and these days, he can be heard gurgling and making funny sounds when he interacts with us. He gets excited quite easily when looking at mobiles and little toys, and then he gets frustrated (or over stimulated) and starts to cry – a trait he seems to share with Spud when she was an infant.
I am curious of what his personality might be.
The last few times I tried to take a snapshot of him, he gave me this perpetual look of surprise on his face. Here are a few shots of Squirt as Spud gave him her sisterly affection. The last one featured here is a funny one as his sister was doing her rendition of Itsy Bitsy Spider on him. 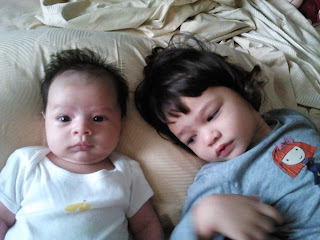 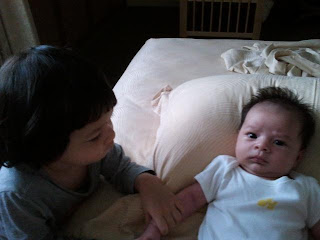 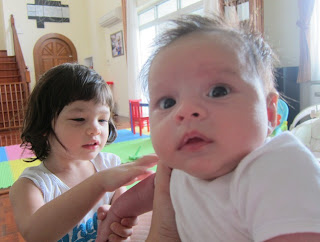