Squirt has been given a month’s supply of Omeprazole for his acid reflux from our last visit to the pediatrician. They come in capsule form and for such a little infant, the stack of meds he got from the pharmacy looks kind of scary!

The thing is, with Omeprazole in Thailand, they do not have the medication in liquid format. Instruction from the pharmacist on how to give Squirt his medication was this:
Apart from that, there was no specific instruction on how we should be mixing the granules with water. Or, if we should be paying more attention to the granules itself, or focus on the residual effect of the water from the dissolving granules. I thought “discarding the rest” was pretty wasteful.
Strangely enough, I received a phone call from the hospital’s pharmacist the next day asking me if I encountered any problems when administering his meds. I was also asked if the granules “dissolved enough” in water, and if the syringe worked.  I did not think much of that phone call until I mentioned it to Silver Bullet later.  He thought it was a little disconcerting as he felt that a call would usually mean that they themselves did not know how the medication should be administered.
It was worrying. Worrying enough that Silver Bullet spent a good time scouring the internet to find information on how Omeprazole should be administered.
We found out that the granules are the most important element for the meds to be effective as they act as a stabilizer to neutralize the acid in the stomach. The recommended way of administering it is by tipping the granules from the capsule into a tiny amount of pureed pears/apples (works if the baby is over 5 months) which acts like a flavouring and should not be considered as solids. Alternatively, the granules can washed down with water.
Knowing how Omeprazole needs to be administered for it to be effective, we have improvised by using a spoon to tip it into the sides of his cheeks and wash it down with just a little water. The annoying thing about the granules is that because Squirt needs only 5mg per dosage, we have to do some estimation and divide the granules of a 20 mg capsule into four.  They are also quite bouncy, and the chances of them falling all over the place when you break one capsule are pretty big!
We both tried counting the granules one by one to give Squirt a more accurate dosage of 5mg, but after trying so hard for about 10 minutes and wasted a few capsules later, we eventually gave up.
It was an impossible task, and I don’t really have the patience to be counting these tiny little balls. 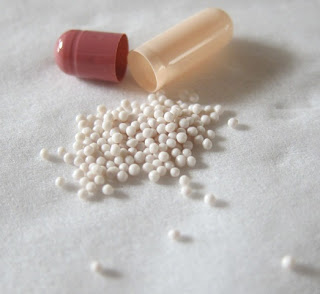 No, thank you very much!

The other problem with this method of administering medication was that there was a tendency that the tiny granules would go into the wrong pipe – which had happened a couple of times with  Squirt. Not very funny when that happens!

The good thing is that it seems the meds are doing its job. Well, at least for now.