Getting stuck in a perpetual traffic jam is a pretty common occurrence here. It is also a common phenomenon that no motorists in their right mind would avoid using the emergency lane in their bid to get to anywhere quicker or, even think for a second to give way to anyone else, and God forbid, to an ambulance.

It happens all the time, and apart from feeling absolutely exasperated from the fact that nothing is moving, no one bats an eyelid to whatever that is happening within the surrounding area. Everyone does it.

That being said, if there is one fear whilst stuck in Bangkok is the very fact that if we are stuck in an emergency, there is technically almost no way out. This concern was further fueled by what we saw last weekend as we made our way out of our soi and was halted by a traffic light that lasted for more than 5 minutes… 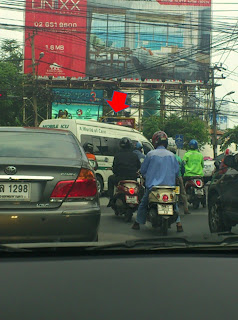 That arrow in that picture denotes an ambulance with its siren on. We have been waiting for the light to turn green for more than 5 minutes, and Lord knows how long that ambulance had been there. For that whole 5 minutes (and more!), no one had the courtesy to give way to the ambulance. From where we were, I could see that the ambulance was slowly trying to inch its way through, but was unfortunately not making much progress. It was disconcerting. What makes it all more disturbing is the fact that these traffic lights are controlled manually by traffic police officers – that means they are the ones who decide how long the green or red light would last. They are stuck in their little box, and tend to have no clue what is going on outside.
My heart sank at the thought of what poor soul was in the back of the van and that not one vehicle bothered to stop for the ambulance to pass through. The nearest hospital was less than 5 minutes away, but whoever was in the back of the van was losing precious seconds. It was heart-breaking.
It is moments like this that makes me want to get out of this country, for this convinces me that should there be anything unfortunate that happens in the streets of Bangkok, it will be hard to get to the hospital alive.
This is real, and it is a scary thought.