There must be something about being high up in the air, because it seems that every time we got on a plane, Spud almost immediately started to show some signs of teething! I don’t know what it is with high altitude, but our visit to Singapore last week seemed to have triggered her teething again when we got to Singapore, and then again when we returned to Bangkok.

I reckon that it will be awhile more before more teeth start to show up (she is still with four since her first teething spree about 4 months ago), but the signs – excessive drooling, sensitive gums, not eating well and unexplainable ultra-crankiness are definitely there!

So, yes! I have been off the blog for about a week now because we went back to Singapore to be with my family over Hari Raya. It was Spud’s first Hari Raya, and I could not help but dress her up in the traditional garb in light of the festivities.

Fortunately for us, apart from her teething, she took to the flight quite well this time and did not give us a lot of grief. While she could not keep still for most of the time, Spud surprised us by actually falling asleep as the plane took off!

We were mostly busy throughout the entire trip going here and there and everywhere, and as long as she was not strapped in the car seat for too long or had woken up at the wrong side of the bed, Spud has been quite a pleasant company.

Despite being in a strange place, Spud’s bedtime routine remained unchanged. In fact, I am most thankful that when it was time for her bedtime, she usually seems quite happy to be put to her cot and left to her own devices before she falls asleep. She would usually get cranky if we try to stretch her bedtime to later. When we inevitably delayed her bedtime by about an hour on one of the days as we were on the road, she ended up having a very restless night.

I guess, Spud being a chronic cat-napper in the day is not a bad thing at all if it means that we can put her to bed by 7pm every night for a full night of uninterrupted sleep.

All in all, while we were mostly shattered, it was not a bad trip this time round. I guess it does get easier as Spud gets older. The bonus was that Spud managed to spend some time with her grandparents, and as the days progressed, she took to them quite easily.

My only regret is not being able to “tapao” all the Hari Raya goodies back to Bangkok this time round as we were verging on excess baggage! 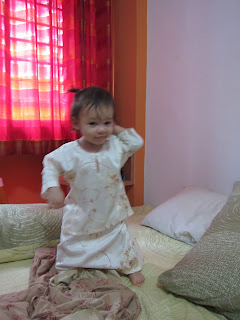 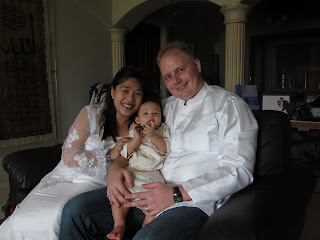 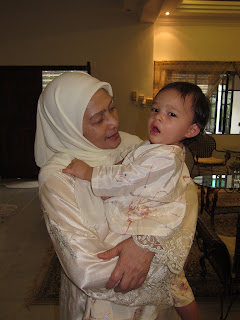 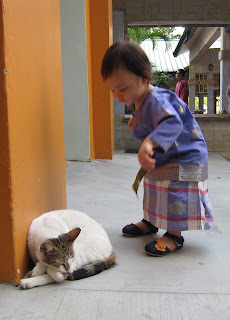 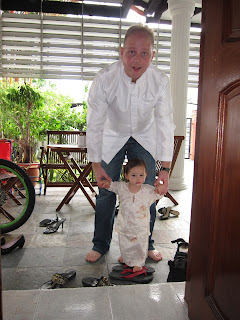