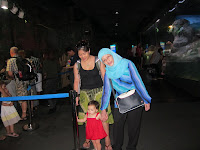 The last time we went to Siam Ocean World was the time when my parents came over for a visit just a few months ago in July.

Since then, we thought that visiting Siam Ocean World over the weekend is actually quite a good way to idle away time. Not only do we get to kill time by keeping Spud busy, we also think that it is a good way to spend some quality family time. If anything at all, the visit there is necessary to prevent both Silver Bullet and me going insane cooping ourselves up at home over the weekend to entertain a hyper kid that just will not sit still!

With such sentiments in mind, we decided to purchase an annual pass which allow us unlimited entry to Siam Ocean World. For 1360 baht per adult, it makes the initial investment almost worth it especially if (and when) we do visit the place every other month as compared to just a single entry deal.

So we visited Siam Ocean World again last weekend with our first ever entry using our annual passes. Despite seeing the same exhibits all over again, it was still a fun trip for us; mainly because we get to witness Spud’s development first hand when we compared her milestones from our previous visits.

This time round, she has shown some signs of distressed each time I brought her near to the giant crabs. They were HUGE, and I think she may have felt uneasy watching their big claws going everywhere!

Apart from that, she took to her surroundings like a champ, and mostly intrigued by things she found on the floor. It is actually quite fun to see her running around, and trying to engage the people around her. If there is one type of aquatic creature she seemed to take some form of interest to, I think it has to be the penguins.She spent quite a bit of time at this one exhibit, and for some reason, she can’t seem to be able to peel herself off from the penguins’ exhibits; and by doing so, inevitably pissed off other kids who had wanted to take pictures with the fake penguins.

I love the candid shots of her and the penguins though. Such innocence! 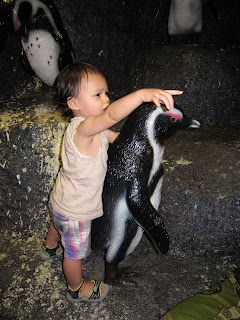 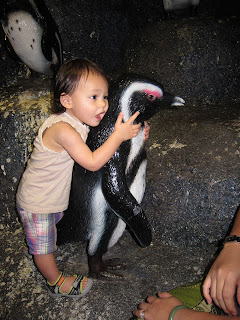 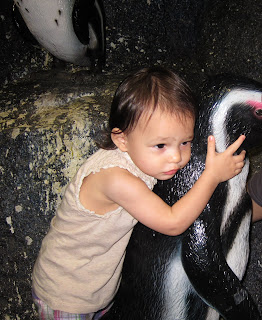 We have begun to feel some affinity to Siam Ocean World, and really, we do see ourselves frequenting the place quite regularly. If not for the exhibits which tend to stay the same each time we are there, then it is just something to keep ourselves occupied to save our sanity.

I swear if Bangkok has a zoo that is anything like Singapore, we will be getting an annual pass for it too!Really not a bad idea to be spending a weekend, I’d say.