While I’m sure they are useful in nature in some peculiar way, I still generally do not like them. The very sight of them makes my hair stand on ends, especially so if I can see them moving, squirming and wriggling away. In.my.bottles.of.dried.spices.

Pantry pests as they called it, are pesky little creatures in my mind. I have no idea how they have gotten inside those tightly closed bottles, but somehow they just do, and they keep re-appearing no matter how many times I tried to clean out the “infected” bottles. Be it a bottle of paprika, fennel seeds, basil leaves, curry powder (all dried) to name a few, those pantry bugs are just relentless. They can even be found in new and unopened bottles of dried spices.

And man! Those things are annoying.

Many a time I have resorted to throwing away the food that I was cooking halfway, just because I was too late in realising that the dried spices I have used were full of bugs. Sometimes I managed to sieve them out if I caught them in time, but those times had been quite rare.

More often than not, the sheer volume of them was too much to be sifted out, and they also happened to just quickly integrate with the food I was cooking on the stove, and sieving became an impossible task.

I try to make a conscious effort to check my dried spices before I put them in my food by looking at them really closely. Most times, upon closer look, I can easily notice the spice leaves moving or that I see black clumps wriggling away.

Sometimes upon checking, I see nothing outright, but actually those pesky bugs were actually buried way at the bottom. So only after I use some of it do I see more movements.

Which is just ewwww.

It is so easy to miss them sometimes, especially when I am not consciously remembering that my new bottles of dried spices have got darn bugs!

Those pantry pests are pretty harmless apparently. Regardless, I still do not like them very much.

Did I already say they are bloody annoying?

Recently, I encountered yet another case of just a-few-seconds-too-late in realising that a bottle of a rather new paprika powder I was using was infested with bugs. Luckily, the powdered paprika full of live, squirmy bugs fell on the ladle and I reacted quickly enough for it not to get mixed in to my gravy.

I then scooped out the bits that went into my food and poured out some of the powder from the bottle into a small sieve. And I took a couple of shots just for you: 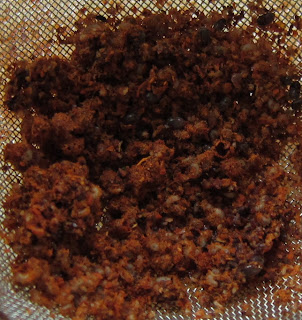 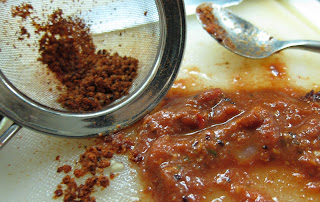 How frickin’ disgusting is that!