Last weekend was the last of a long weekend due to a Buddhist holiday. That means that there won’t be another long weekend coming up till end of July. Given Thailand’s many public holiday, with almost at least one public holiday in a month, an almost 2-months hiatus without any free vacation day would seem…erm…almost wrong!

It seemed like a long wait before another long weekend arrives. And if it does come, we wonder if we will ever have time to savour the much needed time off. With that in mind, we decided to treat ourselves to a short hotel stay by the riverside. It really isn’t so much of having to be by the riverside. To be fair, there is nothing spectacular about the muddy and superbly brown Chao Phraya River. Rather, the decision to book a hotel stay at the Millennium Hilton Hotel was based on a nostalgic one.

A short 2-night stay was all we could afford really, and nothing beats a lazy weekend of lazing around at the poolside and stuffing our faces in a luxurious setting to relax our mind, body and soul. The hotel is equipped with gorgeous pool with a beach-like setting overlooking the skyline. Even the water in the pool was more salty than chlorinated. I must admit, they really do have one of the prettiest pool I’ve ever seen. It’s unique. 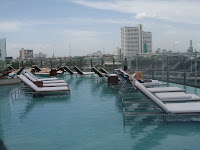 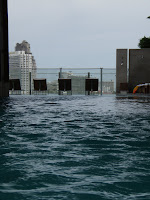 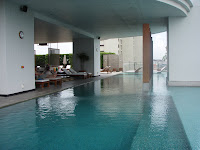 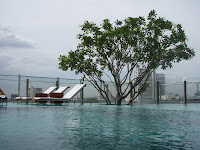 For Silver Bullet, he could not have been happier when he was presented with a cheese buffet for dinner. He was literally grinning from ear to ear with his nothing but cheese dinner, having been able to stuff his face with more than 30 types of cheeses over a 2-hour course meal. That sent him on cloud nine! You could have annoyed the crap out of him and he would not be pissed at you. That was how happy he was.

For me though, the best part about this hotel was really the bed and pillows! I swear this is the only hotel where I cannot rave enough about the ultimate comfort of the bed and the softness of the pillows they provided. So much so that I made up my mind to purchase those pillows from the hotel (but they ran out of stock!). There is no question that I will and I.WILL. get my hands on those pillows and, into our marital bed. I’m already a pillow freak, so the no-stock issue ain’t gonna deter me from getting them. Eventually.

It is good to be able to spend sometime together, just Silver Bullet and I. Given also the nostalgic moments we had with the place, it could not have been more apt to spend our time there until the next opportunity presents itself again.

Oh! And not forgetting, the encounter with the ultimate softness pillows made it all the more worthwhile. Just heavenly.