Everyone has been raving about THE IPhone for the longest time and almost everyone I know owns one…or even two or intends to own one (or two). I couldn’t give a rats’ ass about the IPhone just because everyone has it. I’m a Sony Ericsson kinda chick and always will be. As my almost 4 years old K700i is breathing the last of its breath, I’m in the pits. I have no idea what sort of cellphone I would want next as I’m profusely refusing to succumb to the majority of the world and join in the bandwagon of ’em evil IPhones. 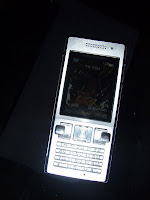 Mobile phones are getting too complicated nowadays, with additional functions which I would hardly ever used. I’m happy to just own a simple, but sleek looking phone. And here’s just what I ended up with – a slim T700. I simply love it!