When I read this article on the recent attempted abduction of kids, I find it hard to believe that such things are actually happening in Singapore. 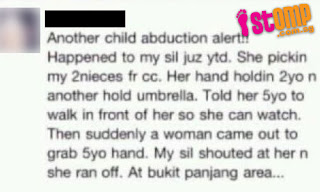 I mean, I grew up in Singapore. The clinically clean, harsh law, no-chewing gum nonsense, safe haven Singapore. A very safe place to bring up kids, with very low crime rate. The only crime story I remembered till today which scared the hell out of me when I was a kid was that Adrian Lim story who murdered kids and cooked them in curry.

For days on end after the news and after watching an episode of Crime Watch covering the case, I was actually quite scared to walk to school (I did not tell anyone of my paranoia; I put up a very brave front), for fear that some stranger would abduct me and make me into some sort of holy curry!

Hence, to read such news report on kids almost nearly get abducted right under their parents’ nose is quite scary. Being a parent myself now, I cannot imagine the anxiety of a parent if a child got lost while they are out together. Imagine MY anxiety if that ever happens.

On the hind sight, I also wonder if parents are just being paranoid. I am saying this because, in Thailand-baby-crazy country, babies and kids are touched by strangers all the time. Sometimes, when parents dine in a restaurant, the staff or diners at the restaurants have no qualms “taking your child away” to mind them for a little while for as long as you let them.

I have always been a little antsy when random strangers tug or touch Spud when I was carrying her, especially when she was a little baby. While I try to let it go, such inconsiderate act made me angry sometimes especially when I tried to get Spud to nap! She was a terrible napper when she was a baby, and there were times when after trying for several hours in trying to lull her to sleep, and when she finally was about to doze off, there was then some random strangers who could not just keep their hands to themselves; waking Spud up all over again!

Back to the topic.

Now, even though I am a little bit more lackadaisical about people touching her, I still refuse to let strangers mind her – and sometimes, I do wish I have eyes at the back of my head.

Truth be told, I can actually understand why parents use the toddler harness when they are out and about with their kids. Such stories about kids getting kidnapped are really not funny.