Spud was pretty whiny when she woke up today, and got crankier by the second as the morning went by. I thought her body felt warmer than usual, although the thermometer registered a reading of slightly lower than 37 Degrees Celsius.

It turned out that she was a little under the weather, taking an unusual early morning nap when she was sitting with me in front of the TV. By 9 am,  she threw up on Silver Bullet twice – TWO definite signs that she was not a 100%. 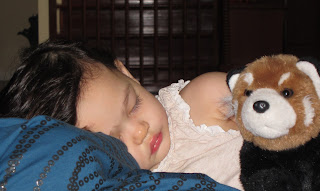 It must have been something in the air – as I, myself, have been nursing a nasty cough, a massive blocked nose and an annoying cold in the last few days. It could be that Spud must have gotten it from me. The weather here may have also played a part as it has been extra-ordinarily hot and humid in the last week.
We can’t really tell what it was, but after giving Spud a tummy rub, a foot massage and Spud dispensing a load of crap in her diaper after that, she seemed OK.  She was a ball of energy again, and was literally bouncing off the walls.
She has not been as difficult as she was when she got really ill while we were in Holland, but the exaggeration that comes with her whining has certainly not gotten any lesser!
For reasons unbeknownst to us, Spud is certainly showing a clear preference for Silver Bullet when she feels under the weather; rejecting me every now and again throughout the day when she sees fit.
It is still not as bad as the last rejection fiasco we have had before, but I am still little bit annoyed when it happened. While I roll with it, and even handled it a little better this time I think!), I really just wish that Spud would snap out of it soon.
On a scale of 1 to 10 though, I’d rate the rejection today as a 2 if I were to compare it to the previous ordeal we had. So, not too bad, really, and I just have to keep telling myself that it is nothing personal.
My only wish is that Spud sleeps through tonight or both Silver Bullet and me can say bye-bye to a much needed rest…