Spud had her first Halloween today, mainly at the request of her school about a week ago to turn up for the day all dressed up in some Halloween garb. She was quite hesitant with the costume at first, and only when we dropped her off in school, did she allow me to put it on her. Perhaps she was inspired to flaunt her pixie-like looking dress after seeing all her friends with their little fancy costumes!

Her costume was supposed to be that of a witch, but I thought it looked more like what a Little Imp would don. Here’s a shot of her I took right after she put on the garb, complete with the witch’s hat: 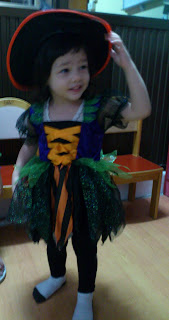 And when I came home, I found a few more shots taken by The Nanny in her impy -looking garb: 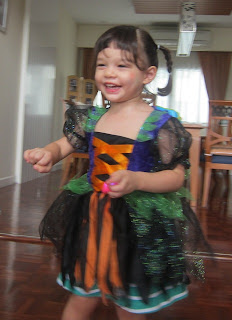 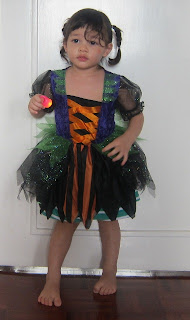 At the school’s request (and I just cannot NOT obliged!), I made some goodies for the kids in the form of Banana Cupcake. They were painstakingly decorated by both Silver Bullet and me the night before, looking a little messed up and not quite achieving the Halloween effect I had in mind. Fortunately, kids tend to be non-judgmental.

This was one of those days I wish I could hear all about Spud’s first Halloween experience. If only she could articulate it to me…but I guess the time will, hopefully come soon enough. 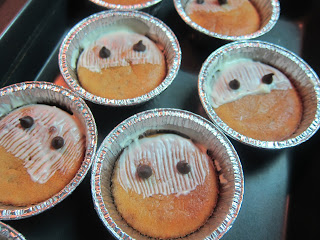