It was 7.30 am…and yet it was looking like it was already 6pm in the evening. The sky looked menacingly threatening.

As Silver Bullet drove us to drop Spud off to school, pitter patter of raindrops started to fall from the sky. There was no lightning bolts or thunder, but just dark, dark skies. Traffic was already bumper-to-bumper. Images from the morning BBC news on Sandy that had happened in New York was playing up in mind. It almost looked like I had walked into a set of a scary movie. It is, after all, Halloween.

It was still drizzling when I walked to work, after dropping Spud off in school with her Halloween costume and a Pumpkin Bucket filled with what looked-like a ghoul cupcake I baked the night before. As usual, I am always one of the firsts to get to the office. And, on days like this, I don’t expect most of my colleagues to show up before 10 am.

I love the peace and quiet at this time of the day. With a cup of coffee in my hand, I turned on my laptop and spent a good 5 minutes looking out of the window next to my desk.

The horizon looked eerily menacing; reminding me of some sinister scene from doomsday-like movie. More dark cloud were pooling in, making the scene looked so sombre that I had to still-frame it. I could hear the wind howling against the windows, and passing through the building at such great speed. 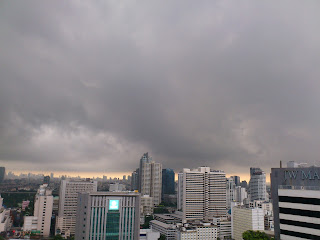 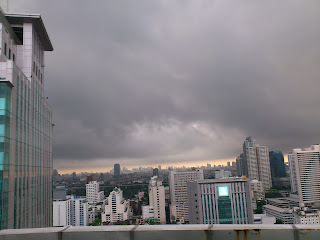 Moments later, it began to rain. I could almost smell the rain through the glass panels, putting me in a little bit of a momentary hypnotic state. Snapping myself out of it, I realised that we had triumphed just another chaotic morning at home. Indeed, this morning seemed particularly brutal – the kids were up really early (before 5.30 am!), they were acting up, the cats were in the way and we parents were subjected to highly stressful situation in trying to pull things together so that we can get out of the door in time for one kid to go to school, and then sending ourselves to work.

Still, much has to be done today. My day at work has just begun, but at least we made through another morning unscathed.