This is one of the signs that are being plastered on the wall of every BTS trains in Bangkok. I found them to be very distasteful, discriminatory as well as stoopidly biased against moms with babies OUTSIDE the womb. 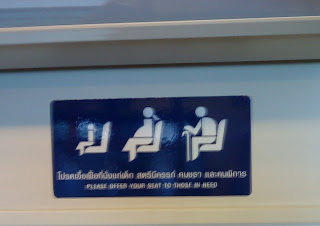 So, no. Once the baby is out of your womb and “upgraded” into your arms, you no longer earn the right to be offered a seat while riding the BTS. But, if you are a monk, however, you’ll immediately be given that priority. And yes, you saw the signs right — the first one depicted an image of a small child.

So yes again: kids of about 4-9 years of age DO get offered a seat. Why, I don’t know; but I fail to see the logic of why non-handicapped kids of such age get priority (of being offered a seat) when they can jolly well stand. After all, they are young, lithe and perfectly capable of standing on their own two feet.

So, that being established, my question then is: why don’t the adults or the kids alike offer their seats to the more needy ones instead? Like giving up the seat to any mother or father who happens to be carrying a baby and at the same time, totting along a couple of bags with him/her?

Wouldn’t then these people be more deserving to a seat on the BTS train as opposed to a 10 year old kid who is able to stand on his/her own feet?

To be fair, there are the odd occasions when I did get offer a seat when I’m wearing Spud. I said ODD. By odd I mean like 1 out of every 6 times. That is a very sad number.

What baffles me more, and consequently annoys me sometimes is the fact that while they take the time to tease, touch, play and generally try to get Spud’s attention while I am standing and trying to keep my balance as I stand, they forgot that giving up their seat for me would probably be the most gracious thing to do! (Reminds me of this post I wrote a while ago)

If that very sign is a mandate for everyone, then yes! I feel discriminated. But, it gets even sadder.

Pregnant women sometimes don’t even get offered a seat. Come to think of it, even when I was very pregnant, the times I have been offered a seat while riding the BTS was far and between. Perhaps, out of the 20 times I took the BTS throughout the times I was expecting, I dare say that only 5 people (or less!) had offered their seat to me.

While there are certainly a few kind souls out there, unfortunately, most people don’t even bother. In pursuit of iPhones, iPads, Blackberries and other material stuff, we human being have lost the basic courtesy of simple kindness and morphed into a very unkind, self-centred “me-first” society.

We live in a very sad and selfish world indeed.