These pictures were actually taken at random, with no such intended sequencing whatsoever. However,  when I looked through them again recently,somehow a little story emerged…

1. Spud stealing glances at Oom Tom’s chocolate mousse and smacking her lips away 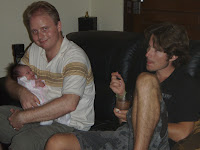 2. Spud screaming her guts (probably screaming I WANT!!) out as Oom Tom puts a spoonful in his mouth. Daddy Silver Bullet trying to soothe her as she was not getting any of those evil stuff as he had not had the chance to touch his own chocolate mousse just yet! 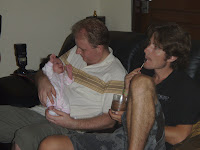 3. Daddy Silver Bullet finally gave Spud a feed, while he himself got fed by me! 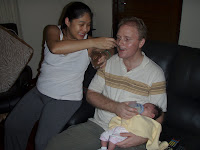 I just thought the sequencing as well as the images captured were spot on, given none of the above was a conscious effort when the pictures were taken. Just hilarious!
*Oom = Uncle in Dutch