[This is a bit of a very delayed post; a post which has been in a draft mode for 10 days and should have gone up more than a week ago. But here it is, anyway]

I woke up one Monday morning of mid-January feeling sluggish, dreading the week I was about to face, but was greeted by a cheerful Silver Bullet wishing me a Happy Birthday as I stumbled into the bathroom. Only to forget that it was my birthday a few minutes later.

When the Nanny came in, I was again greeted by a birthday wish and a little present….only to forget that it was my birthday again that day!

So, that repeated itself over and over again throughout the day, and. somehow, every time I was being reminded by the wishes, I forgot about it right after.  My memory has been like a sieve.

In all honesty, though,  I felt like it was just like any other ordinary day. A birthday for me is nothing special – it is just a day when I am officially a year older. That being said, it felt so very ordinary perhaps because,  this was also probably the first time in years in which I did not take any birthday leave and be done with all work obligations for one day. This year, there just was not enough time for a birthday me-time.

I guess I am lucky that quite a few people made a big deal out of it by just showering me with wishes and gifts.

After lunch, a colleague bought me an ice-cream after he casually asked me of my favourite ice-cream flavour. 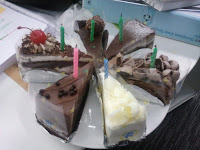 Sometime in the late afternoon, whilst I was furiously typing away on my keyboard, my team surprised me by singing a birthday song out loud  and ambushed me at my desk with a birthday cake after they dimmed all the lights in the office.The gesture was so sweet, not because of the fact that they remembered, but the fact that in the Thai context, that small gesture given to a foreigner meant a hell lot more than just a birthday cake. In the Thai context, it meant genuine acknowledgment, appreciation and some form of  adoration (if I  may speculate it so) from subordinates to their boss that it brought a lump to my throat.I think I may have even slightly teared a little as it was nothing which I had expected at all.

When I got home, Silver Bullet not only had gone through all the trouble of cooking dinner for me but, just as I thought the day was over (and forgetting again that it was my birthday), he presented me with a huge-ass gift.

His gift in the form of Osim foot and back massage device made me a very happy person, indeed! (actually, come to think of it, it probably makes Silver Bullet the happier person as he now does not have to do any more manual foot rubs for me when I absolutely need it!)

It was, all in all a great day and certainly something to remember by!

P.S:
Photos will be posted up later as I am currently away and have no access to download the photos from my camera to my laptop!