This has been one of the most stressful weeks I have had in a long time, and as I am writing this, I am still nursing a cold (thanks to Spud’s slobbering all over me last week when she caught the bug in Singapore) and boy! am I glad that it is Friday!

It has been a crazy-busy period in the office that I ended up doing more than a 12 hour day work week for almost the entire week. So busy that I could not get home in time for a few days consecutively to put Spud to bed as I always do because I just could not get away from work. It was certainly a crisis week, and with so much insanity going on, I have been guilty for overlooking the fact that Spud has turned 13 months just last Wednesday.

I have not seen very much of Spud this week, and when I finally was able to come home in time before she went to bed last night, I realized that I missed her quite a bit. I miss the little tricks she pulls whenever she sees me the moment I walk in the door and I miss putting her to bed as well as being the last person she sees every day to say good night to.

My little girl is growing up.

Right before my eyes, I see this confidently curious, little tot walking and running like a champ all over the place. She seems to be able to use “Mama” and “Papa” in context, and apart from that, still babbles a lot in a language we still cannot understand.

Spud’s also in a “let’s put everything in my mouth” mode. And, I.mean.everything, Everything except, of course, the occasional food which her mama and papa are trying to feed.

She scared the crap out of me yesterday evening with that put-everything-in-mouth-thing.

While dressing her up, I would usually give her something to distract her just so that she will lie flat for a few minutes while I put on her nappy and her pajamas. My weapon of choice yesterday happened to be an empty plastic bottle of mineral water with a screw cap. When I was done with her, I lifted her and placed her standing on the floor as usual while she held on to the bottle in her hand, not wanting to let go just yet. At this stage, I would usually turn away from Spud, and finished off the evening shower ritual by clearing the area and pulling out her nappy and clothes for tomorrow. This will usually not take me more than 10 seconds and since Spud can already walk, I will usually let her run loose.

Last evening, after walking a few steps, Spud decided that she would rather sit on the floor and figure out what she could do with the bottle and the screw-cap which was left unscrewed. She seemed fascinated with screwing and unscrewing the cap to the bottle that I did not think of anything beyond that, thinking that screwing and unscrewing the cap to the bottle would probably occupy her for another minute while I did what I had to do within the usual 10-seconds time-frame, while still keeping a close watch on her.

It so happened that the very moment I turned around, I heard her gag. A gag so scary-sounding, that I immediately dropped everything and discovered that she had managed to shove the plastic bottle cap into her mouth. The bottle cap was lodged inside her mouth and as she tried to swallow it, she gagged harder and her eyes were all red from all the reflex of gagging so hard. The bottle cap was also as big as her mouth, and I reckon, any smaller than that I would probably be attending to a choking emergency!

Still, it was enough to frighten the living daylight out of me, and thankfully, I managed to pull it out of her tiny little mouth swiftly. Spud did not cry, and when I held her gaze and told her firmly that she should not put the cap in the mouth again, I seem, to sense that she may have just understood me. (I think not, but who knows!) She gave the cap-less bottle back to me and looked at me intently as if to get a cue as to how she should react. I was quite shaken to be honest, but put on a brave front and continue to distract her with other things.

While Spud soon forgot about it, running around as if nothing had happened, I on the other hand was literally shaking. I felt my knees buckled, my voice trembled and my heart racing a million miles!

The advice of “Never leave a baby alone with small objects around– not even for a second” holds so true.

I am an idiot, and I should have known better. To a certain extent, being paranoid is not a bad thing; especially not in this case.

And no, she should not be playing with a clothes hanger as well. 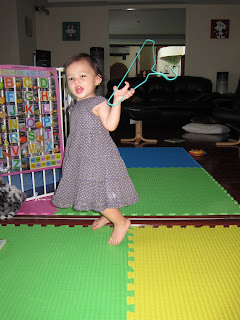