Fudge, despite being quite the loud mouth, is probably our only cat that allows human to do anything to her. We can disturb her, we can tease her and we can annoy the crap out of her, but she tolerates it all. She can take quite a bit, and when she has had enough, she will definitely walk away; but only to come back in a matter of minutes before it starts all over again.

She is a sweet cat, Fudge, and most of all, tolerates Spud’s antics. She is the only cat that is willing to sit next to Spud or being sat on by Spud.

Fudge is such a sweetheart, and Fudge being Fudge, did not even flinch for at least 2 minutes when I put a smiley toy on her head. I thought it made quite a funny image. And then, Spud came along and decided to pa Fudge and play with her….

No animals were hurt during this photo shoot, but I bet Spud had a blast while she tries to make sense of things. 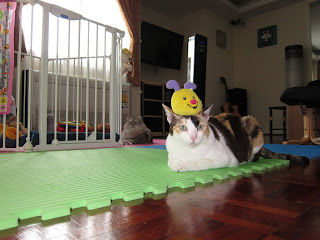 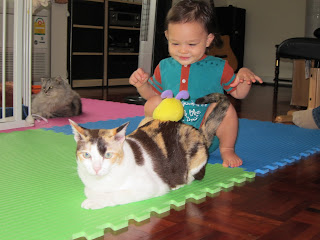