While there are some things I miss about Thailand in yesterday’s post, there are just also many things that I do not miss about it.

After all, the grass isn’t always greener on the other side. There is always the flipside of the coin and below are my biggest things of not missing Thailand. At.All. Let me again count the ways in no particular order:

This was, in fact, one, if not the biggest things with education being an institution in itself and getting a good education is considered a privilege.  They are exorbitantly expensive and we’d have to be filthy rich to be able to send our kids to the lowest rung of the international school around.

Already with the kids at 3 and 5 years old, we were feeling the pinch of the rising education expenses. This was kindergarten, not a day-care yet each kid was costing us at least 200,000 baht a year (about 5000 Euros p/year) for 3 terms and summer school.

Can you believe that at such a rate, the school they were in was already one of the cheapest international schools around? In the long run, there was no way we were able to afford their education whilst living there – especially if we want to transfer them to a better school in Bangkok and take up Dutch.

The whole schooling and education system were absurd! Here in the Netherlands, we are paying less than 100 Euros per kid, per year and that’s on a voluntary basis to cover for out of school activities.

I could cry if we were to add up all that rental monies we have paid on a monthly basis for the last 11 years with no return on investment whatsoever.

It was money down the drain. Poof! No more of that now.

Traffic has gone from bad to worse in the last few years. With traffic jams happening every single day, Bangkok has turned like one big moving carpark.  It is not unusual that moving 100m would sometimes take an hour. You are pretty much screwed if you happened to make one wrong turn.

Just imagine all those time wasted while getting stuck in traffic when you could be doing other things! Time you could never get back. One of the many things I don’t miss.

No more crazy taxi drivers who think they are Michael Schumacher. No more sitting in a taxi without seat belts while they sped, swerved and cut corners. No more encounters with suicidal and drunk motosai riders. No more fearing for our life when crossing the roads while the green man is on or while we adhere to regular road rules like using the zebra crossing.

Tuk-tuks? No, thank you.

Good luck if you are walking around with a stroller and my heart certainly goes out to those in wheelchairs. I know a few people who broke their legs and fractured their knees just from an innocent fall or a light slip. Not very pretty!

Have you read my story about the sidewalk crapper?How about the covered manhole story?

The temperatures can be a bitch, especially from April to August when it will soar to above 40-degree celsius. The heat and high humidity are very debilitating. No fun.

The streets of Bangkok often blew my mind. Whenever there is a sidewalk, no matter how narrow, you’d find locals setting up their mobile carts on and along it.

You’d have to give yourself a wide berth to walk around it/them and walk on the road with traffic going at 60 or 70 km/hour. If you are lucky, you’d encounter open fire at the same time while they get busy preparing food.

Your perfect recipe for disaster!

It was probably the cause of my acute bronchitis, mild asthma and breathing problems; diseases which I did not have prior to my move. The reality of pollution hit hard when both of our kids were also diagnosed with acute bronchitis after months of coughing that wouldn’t go away. They were not even 2 years old then.

Political instability has always loomed in the background. In the course of our stay in Bangkok, we have gone through two coups d’étas in 2006 and 2014, Military Crackdown in 2010 that happened right in our backyard where we were evacuated and in the recent years, bombings in downtown Bangkok.

You don’t have to look closely to see dangerous electrical wiring almost everywhere. Like you, they all will just be hanging out. Out of the sockets!

I am quite petite, yet in Thailand, it was hard to find clothes my size. If I do find any, I have to go for XL or XXL. Being able to fit into an L is few and far and between. Shopping for bras, however, while can be an ego booster was just as annoying as it was hard to find bras in bigger cups or the right fit.

Much like the impromptu visa run we had to do, most rules and regulations have always been murky. This entire “Thai way” can get on your nerves, mainly because it can be quite exhausting to navigate and meander the meaning of things, actions and impact in which you’d never fathom could in a million years happen.

Lying with a straight face and stories of cheating and infidelities included.  Those seem to be a part of the Thai culture. No, I’m not kidding.

There! I could easily list several more but I thought that are just about enough listing. Besides with the cons (easily) outweighing the pros, that alone seems to validate that we have made the right choice of leaving after all!

This post is also written in response to Stomper Dad’s Taboo Challenge with no use of  the words “as” for today’s post. What are you waiting for?  Join in the fun and add your link to take part in the challenge! 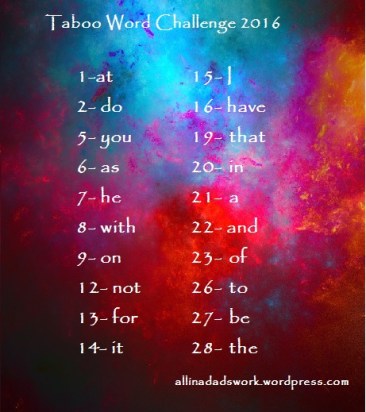