One more month to go before the big monumental milestone of Spud turning ONE!

At 11 months, Spud is a far cry from that once a helpless little baby she used to be. In fact, she has beefed up quite a chunk; my arms and shoulders ache each time I carry her.

As Spud acquires more dexterity in her motor skills, her thirst for exploration grows as she gets more curious with the things around her. She has been quite a busy little baby practicing her new found skills and with that, comes tripping and falling as well (mostly banging up her head against something again. Yikes!)

Now at 11 months, I am pleased to announce that Spud has officially started walking! Just a tad wobbly, but walking. This kid is a wriggly little worm. She just cannot keep still…not even while she is sleeping!

It’s amazing to see how fast she is developing, though. Just about two weeks ago she was only crawling on her feet (not knees – which made her look ridiculously funny), cruising along the furniture as well as feeding herself with her own sippy cup when she feels like it.

(It also seemed like a long while back since we battled it out with the bottle and get her onto the sippy; when it had actually only been TWO months!)

Her nap routine has gotten much better, too. These days, she gets 2 naps  (one in the morning, and another in the afternoon) for at least an hour at a stretch. She goes down without a fuss when we put her in her cot and leave her to put herself to sleep in her own bedroom. No longer do we need to be carrying her around and shush her to take that much needed 15 minutes nap she used to do. Spud is certainly a far cry from when she was younger. What a milestone, indeed.

Recently though, she has shown some disinterest and impatience to being fed her solids. What used to take 5 minutes for her to wallop all her food, will now take us, especially me forever to feed her – assuming she wants to open her mouth at all after taking a few bites! (Yes, it includes cauliflowers!)

While according to the Nanny that Spud always finishes all her food and does not give the Nanny a lot of grief, for us though, the experience of feeding her on weekends when we are at home has been quite the opposite! Not only does she start whinging, she has actually begun not to finish her food altogether, opening her mouth for only 3-4 spoonfuls of solids, and most times, nothing more than that. She gets really upset if we pressed on.

It actually makes me wonder if the nanny is lying when she said that Spud’s okay when it comes to feeding her solids whilst we are away at work. But, I really have no reason to doubt as I have seen her fed Spud and it seems like Spud does co-operate better. While Spud does try to be difficult, I guess it helps that the Nanny has such insurmountable volume of patience. (And I generally don’t)

All I can say is that it can be such a dreadful chore to feed her when she simply refuses to co-operate. Other times, she may co-operate if I act silly enough to amuse her while feeding (the scoop here is that I have to take very deep breaths to keep myself really calm, and repeatedly tell myself not to get mad! Not the easiest thing to do). But like any other times she has been difficult, I hope this too shall pass!
Up until now, I have not really quite realised that that a parent’s job description included that of being a perpetual clown. Amongst other silly things. In the same breath, I have also been wondering if she is ready for adult food as she seems to be showing great interest to what we eat.

Apart from being difficult with when it comes to feeding, she is actually quite pleasant to be around with these days,and I swear her cheeky streaks are starting to show.

So. That is just Spud being Spud and here we are, counting the days and waiting in anticipation for the rest of her developments as she nears a ripe one year of age in exactly 30 days! 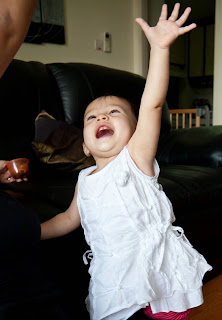 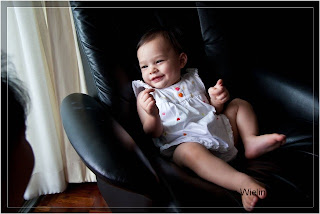