While minding a 3 year old toddler for a fellow mom acquaintance at Spud’s swimming class as she had to go into the pool with Kid #2, I encouraged Spud to share her bowl of snacks which she was eating at that time with the toddler. I thought that it was a good way to encourage some interaction as well as keeping both kids occupied.

Besides, when it comes to snacks, Spud is usually very willing to share hers. She can be so kind with food that I have been told by her teachers several times that most times, she forgets that the snacks were hers and give them all to those who she was sharing with…leaving herself with nothing.

And that was exactly what she did when I told her that she could offer her snacks to the other kid if she wanted to. The 3 year old soon ate alongside Spud as soon as she offered her bowl of snacks to her. Watching the dynamics from the side, I quickly noticed that the kid was quite happily munching away on Spud’s snacks as Spud has forgotten about her snacks altogether while they shared an iPhone screen. Needless to say, most of the snacks were eaten not by Spud, but by the 3 year old and another toddler who joined in later. (Not that I minded to be honest!)

When we had to leave, I had to laugh when the 3 year old came up to me and said, “ I don’t like it” as she returned the almost empty bowl of snacks and shoved it in my hand. 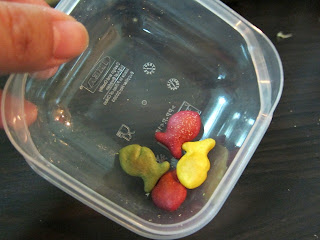