FINITO.
NO MORE, NO MORE, NO MORE, NO MORE. (singing to the tune of Ray Charles’ Hit the Road Jack)
So, yeah! As of mid-April 2013, almost 10.5 months since Squirt was born, I hit the road. I did my very last 3-minute pumping session and I packed away the pump. This time, for good. My pumping career is now officially and truly over.

I introduced Stage 2 formula into pumped breast milk rather unwillingly before Squirt turned 10 months old with much chagrin. He seemed OK when his milk was mixed with formula, but did not quite like it if was given a 100% formula milk. Well…at least initially. Eventually, he took it all without complains.

Pumping has been a daunting task since day 1, but I am absofuckinlutely proud of myself for being able to exclusively feed Squirt with pumped breast milk for almost 8 solid months (just about 1.5 months longer than I had done it with Spud) and 10 full months of exclusive breast milk since Day 1 despite being a busy working mom.  (ahem! If I may say so…)

TEN. Ten freaking months of pumping ritual, day in-day-out, several times a day. It was tough, it was hard work, it was relentless and above all, a pain-in-the-butt.

Nevertheless, I am glad that I stuck to my guns, and ploughed along. I got used to the routine pretty quickly that I did not even bat an eye-lid when I had to pump (and that included pumping away at my desk with just a breastfeeding cover!)

When I stopped pumping for Spud 2 years ago, I remember having a mixed feeling about it – sad, but liberated.  Now that I’m truly done, I am feeling a little nostalgic about it. I remember feeling a little ache in my heart when I saw the last batch of frozen milk started to diminish. 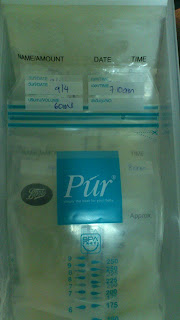 Breastfeeding and pumping is a journey I would never ever go back to ever again, but for what it’s worth, I am glad I did what I did. Looking back, it was sheer determination to want to make it work. There were many highs and lows, and I still cannot believe that I managed such a feat. If you were to ask me if I’d do breastfeeding and pumping full-time again in my next life if I have to, I likely would say yes!

It was all a very humbling experience, and I am glad that I was able to do it and experience it all. This has been bittersweet.