I guess one starts to notice the imminent signs ageing when you start sensing that your once 20/20 vision has started deteriorating right after you hit the big three-o. This is true in the case of Silver Bullet who has never needed any glasses, until recently. 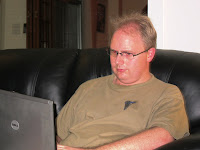 He seems to be bothered by the fact that he no longer can see things clearly from afar, and so, decided to have his eyes checked when we were in Holland as his eye-sight has got progressively worse in the last year or so. They then diagnosed him with something more commonly known as astigmatism, and so, he decided to make his life easier with glasses and not having to squint all the time.

I’m not used to seeing Silver Bullet with glasses, so when he actually starts wearing it, he looks a bit strange to me. He looks so professor-like mister-know-it-all. I guess it’s just a sight I need to get used to.

At least I got to give due credit to that man for wanting to wear glasses when he needs it. I, on the other hand, do actually need my speckies, but I will only use it when I’m working in front of the computer and mostly at work. Other than that, I don’t use it as I really hate wearing glasses. I find them cumbersome (I started having to wear them when I was about 9 years old). I am just vain that way.

I did think of going for Lasik to correct my eye-sight for a while now (actually, only one of my eyes as I have a lazy eye!), but haven’t really got round to my research as I still feel a bit iffy about it.

While it is a nice thought that eyesight can be corrected with just a simple Lasik procedure, I cannot stand the thought of anyone poking right into my eyeballs while at it! It is just grossly ewwwwwwwwww and I am just very afraid at the prospect of these doctors poking my eyes blind!

What if they poke the wrong nerves?

I like the idea of having a perfect vision without the need for glasses, but I still don’t know. I still need to think about it (Lasik)