That last stretch of the pregnancy was a rather trying time for me.

Not only was Spud almost one and half weeks overdue from the estimated delivery date (EDD), there were also no signs whatsoever indicating that the baby would be out any time soon. [3 1/2 weeks overdue if calculated from 38 weeks i.e. @ 38 weeks, the baby is considered fully baked and can be delivered].

After my 38th week, there were still no contractions, no baby’s engagement (she was not low enough), no cervical mucus and virtually zero dilation of the cervix. I had NOTHING.

Spud seemed rather chilled out being in my womb for an extended amount of time. That three and half weeks of extended time felt like an eternity and it took a toll on me and my mood. I was on the verge of depression; even seeking help with alternative therapy to induce with foot reflexology, acupuncture and hypnotherapy.

This is me 3 days prior to delivery (41 weeks + 1 day), looking all poofy and swollen…with still no signs of Spud coming out anytime soon.
When labour finally came, I had a hard time going into labour-proper in my quest for a natural birth. My contractions had started on a Thursday night and continued on into the whole of the Friday. By early Saturday morning at 3 am, the contractions became 5 minutes apart and while my water has yet to break, we decided to just head out to the hospital as it felt like delivery was imminent.
They put me in a delivery room and monitored my contractions for the whole of that Saturday. Even with intense contraction at 98%, I still have only dilated by 1 cm. It remained at 1 cm even after I was induced with oxytocin in the evening. All in all, my contractions lasted for almost 3 days and never actually resulted in what they called “active” labour.
God knows how much longer it will take for my cervix to dilate to 10 cm for me to go for natural labour, given that I haven’t had any sleep since Thursday! And even if we had persevered and waited for me to go into active labour, we wondered if I actually would have any strength left to push, since I haven’t slept for more than 48 hours.
I was lucky to have a supportive and obliging doctor, who pretty much stood by us most of the entire time. While he did give his professional advice, he never once imposed his opinion on us.In the end, we decided to go with the dreaded Cesarian after having been advised that my amniotic fluid is getting lower that it should.
In a matter of minutes, I was wheeled into the surgery room and was promptly attended by several nurses and an Aesthetician. I felt manhandled and violated like a shrimp on a stick about to be barbequed as they administered epidural.
Despite being on a high and light-headed the entire time, I didn’t like the experience one bit as I felt (and still do!) traumatised by it. I think I may have told the Aesthetician to EF Off  at one point in time when she fussed about me and my spine as I felt the pain.
I had tried my best to stay still, but it was almost impossible since I could FEEL the pain in my spine despite being numbed and all; and how dare she complained to the doctor telling him I was not co-operating!  (I figured she told on me as soon after, my doctor showed up and told me gently that I need to co-operate! WTF! Damn Biotch!)
The next thing I knew, Silver Bullet was by my side and I heard wailing in the background.
Out of nowhere, I was presented with a lump of red flesh wrapped in a blue cloth. I remembered feeling rushed and fussed as strangers around us started clicking their cameras at us and telling me stuff I could not absorb at that point in time, given my not-so-sober state.
Everything was a little blur, but I recall going in and out of consciousness while they whisked Silver Bullet away as my doctor was sewing me up. They then put me in a recovery room for 2 hours right after that. I remembered feeling a little miffed at the entire thing as I felt isolated without my husband (who was not allowed in the Recovery Room with me) and my newborn child.
At some point whilst still in the Recovery Room, they brought Spud to me for my very first breastfeeding. The sight left me more amused and bewildered than anything else.
It felt like an eternity before I saw Silver Bullet again in a ward where I was to recover for several more days. After texting a few close friends telling them about the safe delivery, I was then lulled into sleep by a very powerful painkiller that was administered intravenously.
That sent me a-flying immediately. I was in happy land for the night! (And not so happy in the next few days to come!)
The crucial must-have picture that everyone has right after delivery! 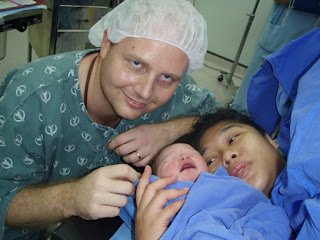