A handful of people appeared sceptical and raised an eyebrow (or two) when I said I’ll be giving birth in Bangkok instead of glorious Singapore. They had genuinely asked about the standards of medical services here in Thailand. Mostly, they were just being sceptical given Thailand is considered a third world country and wondered if it is a dodgy place to entrust birthing and health matters. I attest it certainly is not.

On the contrary to what most people believe of a third-world country, the medical facilities and services of private hospitals like Bumrungrad (aka ‘The Bum’ in my dictionary) or Samitivej just to mention a few, are actually of international standards. No doubt the prices are relatively higher than the government or public hospitals, but it is well worth the higher price for a peace of mind; especially when Thai is not your native language.

One thing for sure, the costs of private hospitals in Bangkok are pretty competitive, and I do believe are relatively cheaper than what you might eventually pay for the private hospitals in Singapore.
For instance, specific to birthing, Bumrungrad has 3 different packages (Prices are estimated based on recent memory as I have forgotten the exact costs):

For the above packages, you get a standard room. Of course, additional charges apply for services, medication and extension of stay. You pretty much have the ward to yourself and the room is equipped like a hotel room. Each standard ward comes with a one person patient bed, with a couch for a family member who is allowed to stay for the night. Silver Bullet said the couch is quite comfy, too!
On top of that, there is a flat-screen TV, a free WIFI connection, a fridge, a microwave oven, a wardrobe, a safe, a computer keyboard and monitor and an array of room services!You gotta admit that for a ‘standard’, it is actually pretty decent!
The “Standard” Room @ The Bum 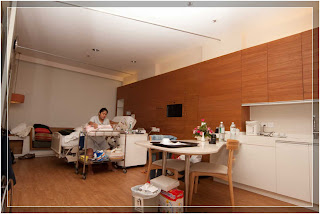 One thing that I thought was  pretty cool is the birthing room itself for those opting a natural delivery. As far as I know, there is only one such room in Bumrungrad. I had the privilege of staying in this room for almost the whole day when I was in labour. The room was equipped with a different type of bed and unlike those in the normal wards, they put in a rocking chair, a radio, yoga mats and those big bouncy exercise balls which I believe are used to cope with labour pains.

The bathroom itself has a bathtub that is meant to be used for water delivery should such means of delivery is desired.

I managed to take some pictures of the birthing room while I was in between contractions…but had forgotten to take one of the bathroom! Those bouncy balls were damn useful distractions for when the contraction starts. Here is one with the very un-glam me on the bouncy balls fighting off hours of contractions. 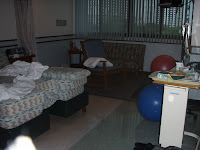 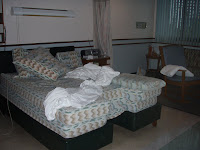 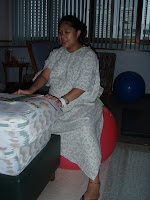 Not too dodgy at all, I’d say!