It seems like Spud has taken an affinity to alternative music. I have accidentally discovered this new little trick in my bid to calm her down as she wailed in hunger while we were royally stuck in traffic one evening. Even though I was sitting right next to her, it was quite tricky to get her out of the child-seat to breastfeed without accidentally bumping her head and fragile body in our tiny Honda City. Hence, I tried all I could to distract her and as a last resort, started fiddling with the ring tones and songs available on my phone.

She almost immediately calmed down with these:
** Supergrass’s Alright,
** The Who’s Pinball Wizard and
** Supertramps’ Logical Song.

She cried at Jason Mraz’s I’m Yours

Spud at her state of calmness 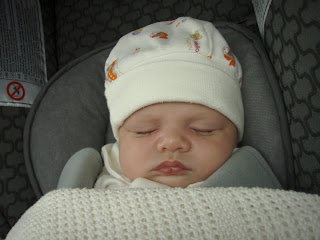 I also realise that sometimes things may have the tendency to not work the next time round. As dubious as the above sounded, I gave it a shot a few times more thereafter whenever she has her crying bouts. So far it worked like a charm! I can only grin from ear to ear at the choices of songs that calmed her down. Screw Twinkle Twinkle Little Stars!

I guess Moms do have a tendency of figuring things out! :p