Recently I stumbled upon an article (and for the life of me, cannot remember which one!), which took me to a link that has information on an average wage of a Singaporean by age. That means, the chart sorts of give you an idea on the pay prospects of the type of occupation one has in Singapore.

The link is here.

And an example of an output based on selected occupation is captured here: 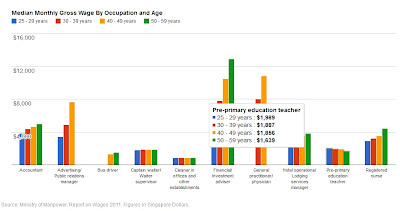 I may be completely off, but I seem to recall that these numbers are looking quite the same from almost 8 years ago when I left Singapore to work in Thailand. If my believe is true, then there has been no increase in salaries island-wide despite having a natural inflation in the last few years. With the rising cost of living in Singapore, I found these numbers to be quite scary.
Unless you live or ever lived in Singapore, I don’t think anyone can get a clear picture of how the average Singaporeans (my parents and brother included) struggle to make ends meet with their “token of salary” after all the deductions that has to be made. Disposable income is greatly reduced, and sometimes non-existent. Cars and housing prices have become extremely unaffordable, and with the current appalling public transport situation – claimed to be the world class at one point – the place has become a joke. The poor are getting poorer, and the middle-class are strapped for cash.
My mom has always mentioned that in Singapore, you need to be rich to be sick. One can’t afford to be sick because of the prolonged medical treatment required which the Medisave (savings from provident fund) can’t quite cover. In her words, it is much more affordable to die as soon as possible because you cut back on expenses. If you are not in the top 20% pay bracket, then you work till you die. Being sick is not an option as the opportunity cost to not being able to work is a greater burden than anything else, even if you don’t have to support your kids anymore.
I guess they have purposely left out the ministers’ pay from their study here as it would have gone completely off the charts.

The thought of ever going back home to Singapore is becoming very unappealing.