…none other than the old-fashioned chicken porridge which I made today since I can’t quite stomach solid food these few days. I’m not quite sure what caused my bouts of gastric-like stomach cramps. I can perhaps, only attribute it to stress.

Porridge… brought back memories of Mom nursing and fussing over me when I was ill. She would actually wake up several times at night to check on me for the entire period of my bed rest when I was deemed immobile. Poor Mom! Always the volunteer nurse on-call when anyone in the family fell ill, even the cats! When there’s nothing else I could eat, she’ll cook me her Bubur Ayam (Chicken Porridge). The only food I could stomach without making me nauseous, and usually in small amounts. Hence, I have been conditioned to associate porridge with sick food, and the fact that it does look rather unappetizing. It makes me wonder why people have porridge for breakfast or dinner. I do find that quite strange as the only reason I would eat porridge is when I’m ill. 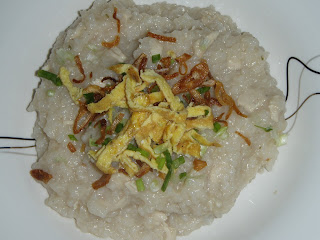 So, here’s my version of Bubur Ayam. Food for the ill. Just making it made me miss my Mom.

Really easy to make and surprisingly, Silver Bullet who simply abhores porridge at all cost, tasted my Bubur Ayam and thought that it was allright and stole spoonfuls of my sick food. I can’t quite taste anything…my tastebuds are just non-existent at this point, yet Silver Bullet said it wasn’t as bad as he thought it would be. He agreed, nevertheless, it doesn’t look all that appetizing. But, hey, it’s Sick Food…my sick food.