The poor cats have been a confused lot since we got here. They can’t seem to get comfortable, they don’t eat very much and they all are constipated. I think they are pretty annoyed at us for disrupting their routine. I’ll go on a limb here and say that they probably hate us right now.

Donut for one, has been squeaking more and more to let us know that in no uncertain terms, does he like his new routine and it is something he does not want to get used to. For an unusually quiet cat who probably has not mastered the art of meowing, his frequent squeaks sounds quite heart-wrenching to the ears.

Poor, poor cats! They did seem more relaxed today (just a tad!) though, but that doesn’t mean that they are liking it. Obviously, they don’t have a clue to the kind of stress we are facing. I reckon all they care about is the fact that they have been greatly inconvenienced and how dare us humans stress them out like that. :p

They looked so frightened in the first few hours of being here that they each refused to get out of their respective cat bags. We had to force them out. A little while later,  I saw the 3 of them huddling together right outside the bedroom door looking oh-so-pathetic, that I can’t help but try to get a candid shot of them all at once.

Of course, the moment I took out my camera, Andy decided to run away and hide, leaving Donut and Fudge looking rather wary, yet so lost. Quite funny…especially if you had seen what I saw when Andy was in between them, with the same (and only more retarded) expression. 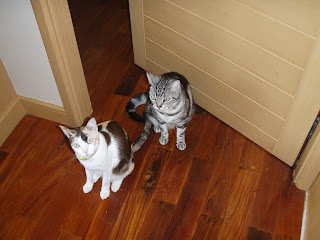 If anything, they are a source of our amusement in this current stressful situation!