My life has been such a bed of roses raising a 3 year old toddler whom by now, is much easier to handle. It gets easier to explain things to her as she understands better. She makes my heart swell. She is such an angel – she is able to articulate her needs better, and she never, ever misbehaves. She is the cutest thing there is.

That, my friends, was in my frickin’ dreams.

And, today just happened to be one of those days where Spud’s week-long defiance is wearing me out. And today is when I felt that when the going gets tough, the tough just wants to run far, far away and not have to deal with a toddler’s ridiculous behaviour. And today, is one of those times in my life when I just want to quit being a mom.

Sigh. If only copping out like that is so easy.

My yelling and screaming at Spud whenever I lose my head with her have been kept in check for quite some time now.Something in me snapped a while back; scared the living daylights out of me and since then convinced myself that I need to get a grip when Spud gets the better of me. I haven’t done that (yell) in months and I have to say that was quite a feat!

Unfortunately, that no-yelling spell was broken as of Monday evening at bedtime. (Hell! I tried.) She behaved alright before that, and just as I closed the door, the little imp decided not to only get in and out of bed while I was undressing to get to the shower, but spoke to me in some gibberish language which she expected me to respond to. I not only have to send her back to bed while I was half naked, I also had to keep asking her what she was trying to say – only to have her repeat a different version of the gibberish to me. Obviously she thought it was a game, but after 10x of trying to be gentle, understanding and empathetic, it was not going anywhere. The more I tried to be patient, the more she pushed me to the brink.I had to yell.

It wasn’t my usual ear piercing yell, but it was loud enough. She immediately stopped, asked me for some water and then she went to bed without a peep.

Today, she upped her ante. She refused to get out of bed. I gave her an option to a) get up and let me shower her together with Squirt, or b) get up a bit later and when I’m done with Squirt, she would have to shower herself. She told me, “later”, closed her door on me and then locked herself from inside.

An (almost) 3 year old closing the door on ME! Isn’t it a bit too early for such defiance? ! (Although I think that in all fairness, she didn’t realise what she was doing)

It was THE trigger for me to scream the house down. I was boiling mad, but I somehow managed to keep my cool and it took all of my might at that point in time to not get mad. Instead I ignored it and I let her be.

Three minutes passed and I was hoping that she would come out soon after as that’s what she usually does since she likes being showered at the same time. But the little imp didn’t this time. Even after I was done with Squirt, she refused to show up. I had to bang on her door hard to get her to unlock it and literally pulled her to the bathroom. Needless to say, it was a rough start to the morning – we were running late, Squirt was getting impatient, Spud decided to do peek-a-POO (telling me she needed to poo, but didn’t) while I was preparing breakfast and I was all alone.(Silver Bullet was out of town)

It was pure relief the moment I dropped her off at school.

When I came home, the Nanny told me that Spud has been rather defiant. She put herself in the time-out corner whenever she did not want to listen to her Nanny and she jokes around with her.I didn’t want to dwell on that piece of information, and thought that since Spud has been nice to me when I got home, she deserved a little TV time of her favourite cartoon when she finished her milk. That was short-lived – she was mucking about and I had to put the cartoon on pause while waiting for her to drink her milk.

She then sat on the floor, legs apart and put the cup of milk between her calves. She then tried to drink by lowering her entire head to the cup (which I watched in bemusement), and then decided to dunk her hair into the cup (me not so amused!).

I gave her a minute or two to immerse herself in it, but not without reminding her several times to please start drinking her milk whilst I grit my teeth to not get mad. When that didn’t work, I tried positive encouragement with a  “Finish your milk= TV”. By now, I had taken a deep,deep breath to try to not yell as she got more impressed with her milk-dipped hair. Being the fortune teller that comes with motherhood, I foresee that she would topple the full cup of milk over. And lo and behold! Just as I was walking over to remove the cup (with Squirt attached to my hip), she knocked the cup over, spilling all of its contents on the floor.

She then looked up at me with a somewhat apprehensive look, clearly realising that she was about to get into trouble, and probably expecting me to belt out another yell. Instead, I took another set of deep, deep breaths, told her to clean it up and then decreed that because she didn’t listen her TV time was over and it was time for bed.

She didn’t fuss about going to bed, and I had every intention to read her ONE story. But when we got to her room, she hit one of the cats again (another recent habit of hers which we are trying to nip) which got me pretty mad. Something which she KNOWS she is not supposed to do.

I still didn’t yell, but I told her there wasn’t going to be any bedtime story. I then told her rather sternly that I was upset with her, gave her a good night kiss and put her to bed. I wasn’t feeling lovey-dovey.

As I left the hallway, I felt defeated. I didn’t know what to do anymore.

In fact, I felt more detached than attached. All those Gentle Parenting and Attachment Parenting advice I read made me feel like I am being such a crap parent. I’m trying so hard not to yell, but I keep on punishing her when she didn’t listen , I take away all her privileges  when I don’t get what I need from her and it makes me feel like I wasn’t being a good listener and for the life of me, could not understanding her emotional needs or respecting her like Gentle Parenting style suggests.

I am not cut out for this Gentle Parenting crap. I am not a frickin’ saint, could never, ever be and my child who looks like the absolute angel in this picture isn’t necessary one. When I try the gentle tactic, my child walks all over me! So much for bloody damn gentle parenting. 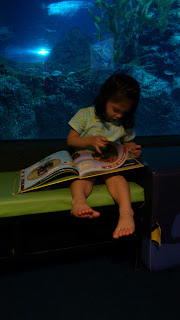 Damn. I wish toddlers come with a manual.

Maybe, one day, I’ll find this post I have written to be really funny. Maybe I over-reacted and maybe, one day, I can reflect back and think that they are all trivial.Or maybe, I shouldn’t be taking all that I read on Gentle Parenting too seriously. Or maybe I just did the best thing ever for my child so she knows boundaries. Maybe it doesn’t even matter 5 years from now.

But today, I felt like crap.I don’t know what’s the right thing to do anymore, and sometimes I feel like giving up. It scares me that I may screw up as a parent, inevitably screwing up my children’s life and not know till 25 years later.

And that would suck.

And it would have been all my fault.

But I didn’t yell. I felt helpless and I did not yell. And at some point, I am sure I would be screaming my head off again.