Since we bought the annual pass to Siam Ocean World almost a year ago, we have, naturally, been   a rather frequent visitor there. We go there almost every other month, usually on a weekend to keep Spud and ourselves occupied when we have nothing better to do.

The best time to get there is the first thing in the morning as we don’t have to battle the crowd. Getting there any time after 11.30 am on a weekend is a royal nightmare with finding a parking spot as well as having to join in the snaking queue to get in (for some reasons, they do not have a special line for members with annual pass, which is a very silly thing to do!)
Besides the penguin’s exhibit as Spud’s favourite and the sight of the fish which may or may not intrigue her depending on her mood that day, the other worth-it area is was actually the kids’ indoor playground. For us, it is a good way to idle away time in a somewhat educational way, but also enable us to “park” Spud there for a bit as she tires herself out before we stop for lunch.
Considering that we don’t usually spend more than 2 hours in there, buying ourselves the annual passes have been a rather worth-it investment as the passes enabled us to not spend an insane amount of money on a per entry basis.  Because it was so worth it, we thought all along that it would be a good idea to renew our membership in the upcoming months when it expires sometime in August.
Until last week , that is;  when we discovered that they have completely overhauled the kids’ playground area to a useless and senseless money-making 3D photo studio booth. Suddenly the thought of renewing our membership is not appealing anymore, as truly, the indoor playground was actually quite a big part of the draw. For parents with small kids, huge aquariums and playgrounds are ideal.
To say that we are “just disappointed” is an understatement. In fact, I am extremely annoyed that they replaced the kids’ playground with some stupid photo booth which I don’t really give a crap about. What a shame!Shame!Shame! 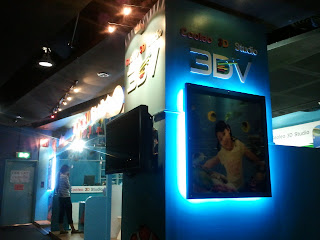 What’s worse was that Spud actually remembers about the playground and kept saying, “play, play, play” as she went around trying to look for it – and this s despite the fact that we have not been there in more than 2-3 months at least!
It was quite disheartening to see Spud as well as a few other helpless little kids (and parents alike!) , looking around for the playground and not being able to locate one!
We have been making her excited about the fact that she not only was going to see fish and penguins, but gets to run around and bounces off the walls of the Ocean World’s playground! For the first time in my life, I felt what it was like to feel so disappointed for not being able to make-good our promise to Spud.
We left almost immediately after that, feeling a little sorry for Spud. We then made our way to Central World where we usually go to on every other weekend as well, to let Spud run around. It is a much bigger playground located on the 6th floor (or was it 7th?!)  of Central World (and it’s free!) and we know that  Spud loves playing there as well.
Unfortunately, when we got there, the playground was also closed that day!  I don’t know if the closure was permanent (I hope not!), but I reckon that it was closed only temporarily for renovation (which is way overdue, really!).
What luck!
Luckily, Silver Bullet remembered that there is another small-ish playground within the Kids’ Department at Isetan and so we made our way there just so that Spud could release some energy. It was not spectacular, but it was doable – enough to make-good of our promise to Spud in bringing her to a playground so she can play.  However, that in itself became another story altogether befitting for a separate post.
What a weekend that was.
One thing for sure, we ain’t gonna be renewing our membership passes to Siam Ocean World next time round !