As far as I can remember, I have always been a big fan of Mr. Men and Little Miss since, but never actually owned any of those books.

Even after surpassing my 30s, I still find those characters hilarious. I don’t think I have ever disliked any of the characters from the books. My particular favourite is Miss Trouble.

So, when I saw a box of sturdy hard-pages, mini-books of the Mr. Men series, I decided there and then that Spud should be entitled to her own Mr. Men series. 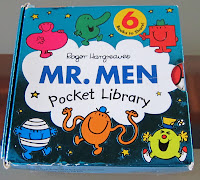 I was not sure how Spud would take to it when I bought it (I could only find Mr. Men), thinking that it would mostly be of interest to slightly older kids,  but when I introduced it to Spud, she quickly took to Mr. Bump and Mr. Tickle like a fly to a pile shit.

Which makes me completely happy, because those Mr. Men books are just brilliant little things.

Spud now even asks for it when she does not see those books during her meal-times! (We use books as distraction when we feed her, just so that she would eat and they are now looking worse for wear; with some bits of food left-behind in between the pages)