We cracked something new recently with Spud following a gentle tip from our Nanny on how to have a relatively peaceful feeding Spud session. And that is by blasting children’s music consisting of “The Wheel on the Bus”, “London Bridge is Falling Down”, “Itsy Bitsy Spider, “If you are happy and you know it..”, as well as the very annoying “ The More We Get Together” Song.

For breakfast, lunch and dinner.

And then I will have those songs in my head till about mid-day while I am in the office; and just as soon as I was about to forget it, I come home only to hear them all over again.

It gets worse in the weekends as we have to play that darn CD during the 3 meal times if and when we are at home.

Apparently, the Nanny has been having some trouble feeding Spud from time to time, and had discovered this in her bags of tricks. Since then, feeding Spud, while still can be challenging at times, has been more of a breeze. We have only started employing the tactic about a week ago, and at the risk of jinxing her now-better eating habits, feeding her with the music on while we sing to her really did wonders to her (actually more of ours!)  feeding experience.

While we thought we sort of figured it out last time when it comes to food with Spud, it did not last very long. She soon got bored of the spoon-and-empty-bowl phase, and very soon afterwards, tested our patience by dipping her entire hands into her food bowl whenever she can.

I have, for quite awhile (you should see the halo on my head!) stopped getting frustrated with her, and calmly and steadily just allowed her to play with her liquid food while I watched her. It was a disastrous and messy affair , and funnily enough, both Silver Bullet and I shrugged it off and ended up laughing our guts out. Here are some pictures while she was at it for a good 15 minutes and I could only cringe inside and shudder in utter eeekiness as she smeared all those liquidy stuff all over my hands and some bits of it splattered on my face, hair. (Good thing I was wearing an apron!) 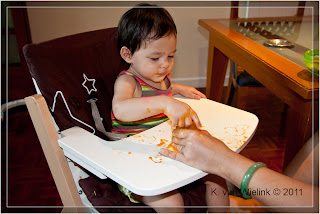 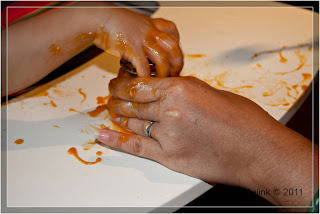 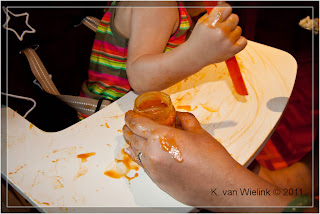 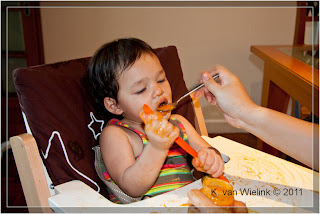 It was a disaster to clean up afterwards. Liquid food was smeared just about every-frickin’-where!

I guess she just needed to get it out of her system as surprisingly enough though, and as far as I can remember, that was our last “food fight” since then. I don’t think it ever happened again after that. For some reason too, these days, Spud starts to show signs of her yukkiness to food stuff and gungon her hands.

We have since found the music trick to be working. Okay, well…at least for now.