When I was about 16 weeks pregnant with Squirt, the results from one of the routine blood test had immediately put me in a high-risk group of having a baby with Down syndrome.

The odds that was presented to me was 1 in 55 as compared to the average of 1 in 256 (according to the doctor) for women my age.  The numbers presented seemed scarier when the doctor compared it to my previous results when I was pregnant with Spud – 1 in 1188. 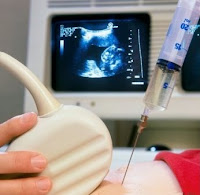 As much as the thought of a fat-ass needle being poked through my stomach sickened me to death, we knew that I had to get the amniocentesis done. I knew that I want to get the test done, and there would also be no question as to what our decision was to be if I was to carry a child with Down…

For those not familiar with amniocentesis, the test involves taking a small amount of amniotic fluid, i.e the water that surrounds the baby in the womb which contains cells from the baby that will be tested in the laboratory. Before the test is performed, however, an ultrasound scan will be carried out to check the estimated gestation period and the position of both the baby and the placenta.  When all of that is done, the skin over the abdomen is cleaned and a fine needle is then inserted into the stomach to extract the fluid from the womb. Throughout the procedure, the position of both the baby and the needle are monitored by the ultrasound.

I remember squeezing the hell out of Silver Bullet’s hand when the needle was inserted in my stomach – mostly because I always cringe at the sight of needle and just out of sheer nervousness. I had my eyes closed the entire time, not wanting to look even at the ultrasound screen.  To be honest, though, it was a relatively short test of not more than 5 minutes. It was over before I knew it, and, really, the thought of it was worse than the actual test. The entire experience was more uncomfortable rather than painful.

When it was over, I was given quite a high dose of Ventolin in a tablet form (apparently to help relax the uterus) and was under strict instruction to restrict my movement for 2-3 days. I thought it was a bit exaggerated, thinking that I should still be able to go to work the next day. After all, I am mostly desk-bound.  But Doctor Ah-Chai meant business. In fact, he put his foot down by giving me 2 days of medical leave instructing me to do a lot of bed rest.

While I had no intention to follow his instructions (which I really thought was an over exaggeration), I bit my tongue. Little did I know that the aftermath of Amnio can be so exhausting!  By the time I got home, my heart started to palpitate quite aggressively – a side effect of the Ventolin. I had something that felt similar to period pain and I felt so exhausted that I could hardly peel myself away from the couch. This continued on for the next 2 days as the cramps persisted and the exhaustion overwhelmed me.  It has to be said that Dr. Ah-Chai wasn’t kidding about me having to do some bed rest and stay off my feet!

What became more agonizing was the weeks and weeks of waiting. One week became two and two weeks became three, and then we were due to fly to Holland for our 2-week vacation. When I called after 14 days, they informed me that they were still testing it; which lead to further nervousness on my end, thinking that something was godawfully wrong.

At that time, I was only too aware of the timeline that they may just release the results when we were already in Holland, and by then I was well into my 24 weeks of pregnancy to consider TOP (termination of pregnancy) had the results been unfavourable. It was just excruciatingly tormenting! Then one day, out of the blue, I received a phone call from the doctor while I was still in a meeting.

As I excused myself from the board room, Dr Ah-Chai started off the conversation on how I was in the high-risk group. He then continued on explaining the numbers and how that relates to the risk, how my age can be a factor, how I stacked up against other women my age group and how it would impact on the test results.

At this point, my heart started palpitating again and I swear he was just prepping me up for the kill. Instead of giving me the results, he then rattled on the risk and a 2% chance of my baby being Down.

I remembered telling myself, “OMG! He IS going to tell me that I am in that 2%, isn’t he?”

So I let him went on, about ready to piss in my pants and burst into tears as I waited on the other end of the line for him to deliver his final blow. Of which, he ended by saying, “ I strongly recommend you to go for Amniocentesis!”

That was when I got confused, and said, “But Doc, I already did the Amnio. You were the one who did it a few weeks ago. I am waiting for the results now”

He then replied, “Oh? Really? But I don’t have your report here…oh wait! The nurse just came in with your results. I had the wrong one. Hold on. “

He made me wait for another 10 seconds which seemed like eternity before her said,“Congratulations! Everything is fine . Your test results looks good. Nothing to worry about!”

Of which, I immediately let out a huge sigh of relief. I then asked him again if he had the right report and practically bombarded him over and over and over again if he was sure that everything was fine before we ended the conversation.

He reassured me that the test came out negative, and with Amnio, one can be really certain that all chromosomal disorders, including Down Syndrome,  trisomy 13, trisomy 18, and sex chromosome abnormalities (such as Turner syndrome and Klinefelter syndrome) can be detected with >99% accuracy. (Although I wasn’t sure if my test was only for Down)

While it was a huge load off my shoulders, I cannot believe that my doctor can be such a doof-head sometimes! I was thinking perhaps he could do with a course on how not to deliver any news by emphasizing on risks and the chance of it happening and actually letting his patient believe that he was about to deliver bad news.

Talking about the doctor being a bit of a doof-head, while we always make it a point to remind him that we don’t want to know the gender whenever he did an ultrasound scan,  he also had accidentally let us know the gender of our baby at our next check-up . This time, he had absent-mindedly flashed the results of the Amniocentesis test on his computer screen to us while he picked up a call from his mobile.

I have always preferred not to know the gender, wanting it to be a surprise just like we had with Spud. Hence, I was beyond bummed when my eyes caught sight of the gender, and when we told him that we did not want to know, his reply was, “Oh! I’m sorry. It happens!”

Of which, came my reply, “I don’t want to knooooooooowwwwwwwwwwww!!!! “

So there you go. An extremely amiable and very decent doctor, but just a little bit of a doof-head. The story of my life – I guess, nothing beats the spices being littered in every now and then to make it all the more exciting!