As of today, I am officially unemployed! (Well…I’m actually clearing a couple of official sabbatical days prior to my official-official last day, but that’s just me being technical). By 9 a.m. I had happily plonked my backside on the chair of Dr. Feet getting a one-and-a-half hour long of a very much needed foot massage.

It was divine! No (corporate) responsibilities. No meetings. No kids. No plans. No stress. For once in a long, long time, the whole set up felt really good; even if this luxury of having a little me-time would last for only a few days till I start my new job next week.

That being said, I still feel a little sentimental when I thought about a particular “Fried Chicken Party” that was held at the office yesterday.I had intended to quietly disappear before 4pm after all the personal goodbyes to several people, and so when I was told to stay a little longer for a “Fried Chicken Farewell Party” (quote-unquote from one of my colleagues), I was completely surprised. It wasn’t just some random, ordinary “Fried Chicken Party”. It was a party set up by my very sweet colleagues who took the trouble to plan for a small, intimate farewell party for me on my last day at the office. In all honesty, it was not something I had remotely expected, as I didn’t think anyone would have cared or bothered.

But it turned out they did. They bought lots of yummy fried chicken and said some really kind words that touched me deeply. Deep enough to make me weep. Yikes. (Damn it,Ex-boss!And I’m saying it endearingly) My team said a heart-felt, “Thank you, Mom”. I couldn’t decided there and then if it was a good or a bad thing.

And then, I was thrown into the spotlight and there was no escaping of having to deliver a speech. I was completely unprepared and I.had.to.give.a.speech. I had to think on my feet and my mind drew a blank whilst my heart had crumbled by the touching words that was delivered just minutes prior. (I thought that was unfair. Hmmph! Damn it, Ex-Boss).

And I tried very hard to compose myself.

And I surrendered to the mighty,mushy heart and let out some tears as my head screamed silently in protest, “This is bloody unfair! I can’t be tearing in front of 30 people!”Arrgghhhhhhhhhhhh!

Not cool. That wasn’t supposed to happen.

But it did. And in between tiny sobs (just a tiny bit!), I braced myself and rambled my thank yous, still could not believe that the team had bothered to do a little something for me. I was touched and I was humbled. It was a small gesture, yet it carried a lot of meaning. It was genuine. I feel blessed. 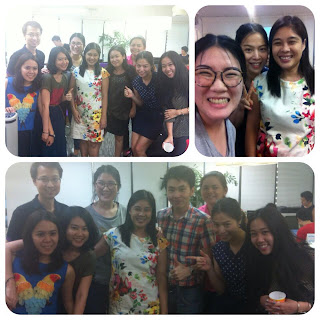 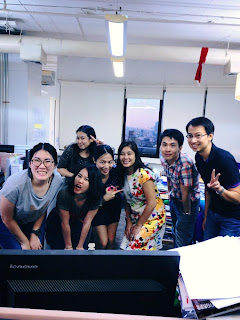 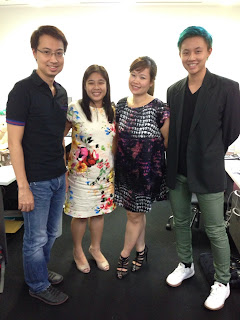 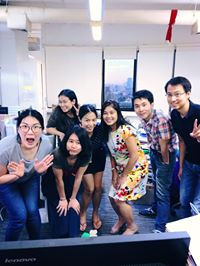 It was also symbolic for me. My tenure has officially ended, and for what it’s worth, I hope that I have inspired the people I worked with and no matter how small, I sure do hope that my contributions have had a positive impact on them. My job is done and whether they realised it or not, these people are talented individuals – I have actually learnt a lot more from them than they would ever have from me.

My desk had never looked so clean and empty. It was a good place as I had a very distinct vantage point and most of all, my desk was all “fengshui-ed” up.

It was a nice ending. It was an end that symbolises an imminent new beginning.

And oh!Fried chicken now brings an entirely new perspective for me!