Squirt’s a big boy. He is a happy, razzing, gurgling, blowing raspberries chunky boy! At 4 months, he now fits comfortably in a 9 month old onesies – it makes me wonder if he really is THAT big or the cut of those onesies they sell here are just a tad smaller…

But then again, he is already fitting nicely in Spud’s hand-me downs where she wore them when she was over 9 months old. Hmmm. This one got his Papa’s genes.

He found his thumb recently, and we found that many a time, he took to his thumb to soothe himself when he wants to go to sleep. I guess I’ll start worrying if he is still sucking his thumb(s) when he is over 5 years old.

This is also the period when apparently his reflux will be at his worse. Granted, there has been days in the last couple of weeks where he had seemed quite bothered by it. He was spitting up by the loads, and then there was that piercing screams…I do hope it will get better.

Despite his reflux and thus his tendencies of being difficult, I found it endearing that he seems to enjoy staring into my eyes quite a lot. He has been doing this since he was about a month old, and almost always with a ready smile. It is something I would not have expected of him given that his sister, Spud, never really did want to hold her gaze on anyone for long since she was a little baby. Squirt’s stares though, tend to be deep, intense, purposeful but gentle. He seems to be at peace if he gets to hold anyone’s gaze – something which I am getting used to and liking very much.  While he stares, he also then starts to “chat” quite a bit. He smiles loads – lots more than Spud ever did when she was a baby.
And oh, boy! Does this chunky baby laugh! He laughs heartily when I make silly sounds, or use my mouth to tickle his belly. He certainly is at the age now where he is getting more responsive – and that is always nice.
He also seems to like Spud very much. For, whenever Spud is in his line of vision, he will be following her with his eyes, and even turning his head to “follow” her – flailing his arms and feet in excitement.
Ahh! How time flies. I guess it will be a matter of time now before we start introducing solids to him. 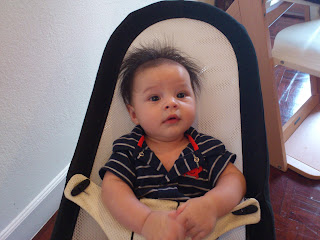 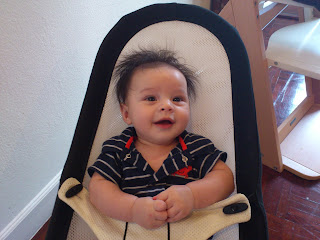 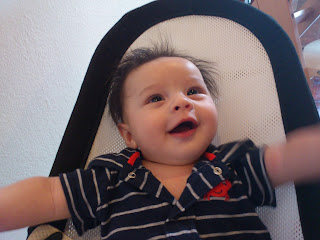