Once upon a recent-time, I loudly and boldly declared that there was no way in hell I would ever want to travel with our two young kids.

(Round about 3 months ago, I had “that phase feeling”  brewing and felt that it was necessary for us  get out of Thailand for a little bit, especially since I haven’t been out of the country in more than a year.  Around that time, we contemplated on the possibility of traveling out of Thailand as we did not quite want to be in Bangkok again for another Songkran. With more than 2 weeks of vacation-time available in our hands, it would only make sense to travel to somewhere further rather than Asia. And, with us now having to travel on a budget, going back to the Netherlands seemed like the ideal thing with free accommodation as an option. Still, the sheer thought of a plane journey with 2 little ones, be it short or long-haul, sent shivers down my spine.)

19 days ago, I have officially stuffed up both my feet in my mouth and shoved them into my throat. We took the plunge by hauling Spud (2 years, 8 months) and Squirt (only 10 months old) on an 11 hour flight journey to the Netherlands over the long Songkran holidays for our family vacation.

If anything, that explained the lack of posts on my blog.

For 17 days, we busied ourselves by being full-time parents. The plane ride was exhaustively tiring.  We have had our share of bad flights before and this time round, with double the potential chaos, we had hoped for the best and were mentally prepared for the worst. Forget about being able to do “big stuff” like watching one movie in full or even attempt to read the in-flight magazines, let alone a book…but thankfully, the bumps were nothing which we could not handle. Both flights, if anything were uneventful; in fact, it was even better than those flights we have had with Spud before.

Spud even made friends with an older kid who was only too willing to indulge her antics. She even made conversations with 2 other ladies that were seating almost next to her.

We did not get much sleep both ways with only 10 minutes to almost none on the way there and only a couple of hours on the way back.  While Spud managed to get a few hours of shut-eye camping out in her own seat as deemed what being comfortable means by her standard, Squirt has proven to be a lousy sleeper if he doesn’t get a bed. He refused to use the bassinet, cried bloody murder each time he was being put down that we took turns to carry him in our arms while he slept, or dunk him in the wrap after many, many attempts in trying to get him to sleep. He was so distracted by everything that it was almost impossible to get him to sleep. He was over-tired.

Other times when not sleeping, Squirt was just busy crawling and toddling on the floor – much to the chagrin of a few flight attendants and several fellow passengers.

For most part, both kids behaved surprisingly well throughout the entire trip. They both had their moments (of crankiness), but there certainly had been no major meltdowns.  Both kids seem to travel well. They adapted and adjusted pretty quickly, with minimal crying and temper tantrums. I even dare say that we had a splendid and an enjoyable holiday!

After more than 2 weeks away being in different places and strange beds, the kids (especially Spud) were showing signs that they were ready to be home. I am still a bit jet-lagged and feeling extremely bothered by the hot weather in Bangkok. I can’t even think coherently to write one proper sentence but I promise to cover the places we ventured out as soon as I can.

Watch this space. Meantime, here are a few shots from Spud snoozing in the plane – try spotting her in the first few pictures. 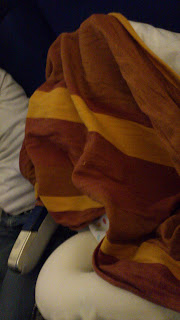 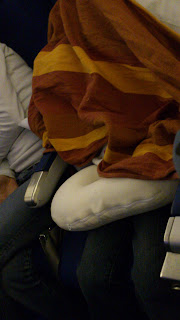 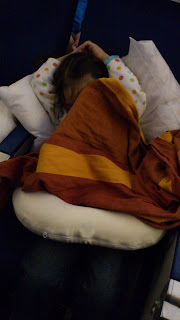