I have a confession to make.

I have a thing for men who carry their babies in those cool baby-carriers. Okay, well…I don’t mean the men per se. It’s not like I’m gonna stalk every men out there that fit my description and have their wives hating me for being a husband snatcher, thank you very much! But rather, I meant the image of Dads who walk around wearing their babies so proudly on their backs or attached to their chest

Me-thinks there certainly is something about that image.Very endearing. Sexy even. I truly heart the sight of men who wear their babies! 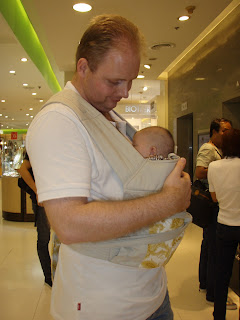 Here’s Silver Bullet wearing my Mei-Tai; which essentially is just another type of baby-carrier. Ain’t that just the most endearing sight!
For some reason though, we managed to pull in a lot of stares and a small crowd formed (mostly females) as they intently watched us while I was helping Silver Bullet don on the Mei-Tai for Spud. As soon as Silver Bullet was done, these girls just melted away and broke a few smiles and giggles.
Ahhh! I guess my husband just became a chick magnet. 😀