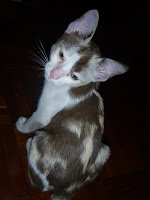 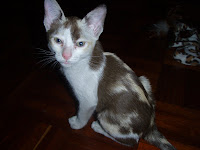 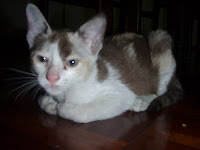 Can you bear to give this up? Trust me, this wasn’t all planned and we are contemplating adoption.
How it all happened was when I saw this little bugger sprawled at the lobby amidst 20 other human beings as I made my way downstairs from the office. All I did was just gave her a pat and told myself that I should walk away.
Walked away I did. But I was still thinking about the little fella as I parked myself near a cafe at lunch. I was even contemplating of walking the other way to avoid seeing her again on my way back to the office. I then decided to call my colleague (a cat lover) and told her about this little bugger.
I suggested adoption (she and the cat) and even though she already got 5 cats at home, that didn’t stop her from rushing 22 floors down!
As I was waiting for my colleague, the furball has already made her way to me and started with the figure of eight around my ankles. Cue: awwwwwww!  Dammit.
Both my colleague and I did not have the heart to leave her by the side of the busy main road, and so she brought her up to the office and I went off to buy her some food; all with the intention of getting her adopted if not her, by someone else.
The problem was,  someone has to keep her at least temporarily. My colleague was not able to and there was nobody else to take the kitten for the evening. We also could not just leave the kitten wandering about in the office!
Feeling helpless, I called Silver Bullet to discuss the situation. We agreed that I’ll meet him at the vet after work as the least we could do is get the bugger checked. At the back of my head, I thought there would be a chance that they would take a young kitten in. There was no way we could keep another cat.
Funny how we both burst into hysterical laughter when I said that we would put it up for adoption after the visit to the vet. We then somehow brought her home as the vet could not keep her. We  had every intention to give her up for adoption. I know I adamantly did!
Back at home, we placed the kitten in the guest room where she was to spend the night.  Or at least till she’s ok to meet the other 2 resident cats and for adoption thereafter.
Andy and Donut were curious. They did not seem to like the intruder.
As a precaution, I suggested that it will not  be wise to give her a name if we are not gonna keep her eventually. By the end of the night, however, Silver Bullet suggested “Marbles”. Just like that. Out of the blue. Even though I had said, ” Strictly NO NAMING!”
She’s friendly, agile, healthy and loud!
Oh dear me…what have I got us into?