Gone are his reflux days, and Squirt is no longer on his reflux medication. He has been completely weaned off Prevacid when he was about 8+ months, and he seems to be holding up really well without any medication. Another reason to go Woooooooohoooooo!

Squirt is still as smiley as ever, if not more. He laughs so easily too, and even when he is tired and sleepy, he still is able to flash you his grins just by us talking or chatting with him. He has got these tiny little dimples on the corner of his lips whenever he smiles, and that makes his facial expressions ohsocute.

This little boy needs distraction when it comes to food, but it still is a joy to see him enjoying his solids. We still haven’t been offering him finger food consistently – that means, he is not yet trained to feed himself. That means, I’ll probably still feeding him when he is 20.

He seems to be more adventurous to try new things though, as it is looking like he is enjoying drinking his milk off a Doidy cup at meal times. He gets upset if we take the cup away from him, and would scream if we don’t give him the cup. At the same time, he has somewhat figured out how to use a straw when he started nicking off Spud’s water bottle whenever he gets his hand on that, resulting in a very whiney Spud who gets upset that he is taking her things away.

At 10 months, we are now officially a bottle-free zone, too! He has been completely weaned off his bottle when he was about 9.5 months, and has been using the sippy cup since for his milk intake. One more reason for me to go Wooooooohoooooooooo! (A post on weaning him off the bottle in a separate post)

Squirt’s certainly getting more vocal and tends to want to engage in a “conversation” especially with his sister every now and then. He blabbers, grunts, screams and gets really, really excited when he sees the cats. He has been properly hyper too these days; even I am finding it hard (not to mention exhausting) in trying to keep up with him.

The good thing about him is that he still does a much more decent nap than Spud ever was – napping at least 2x a day for at least an hour each time, and sleeps better in his own cot. A norm for most, but for us, having gone through Spud almost napless period for over 8 months, having a baby who naps is god sent!

Squirt still hasn’t got any teeth just yet, and as for walking, he is still working on it! I reckon him walking will not be too far away now given that he is already able to stand up without any support for a few seconds.He is going to be a bumbling little toddler, soon. 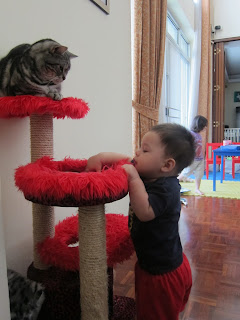 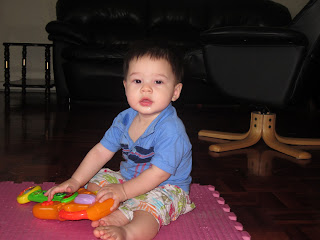 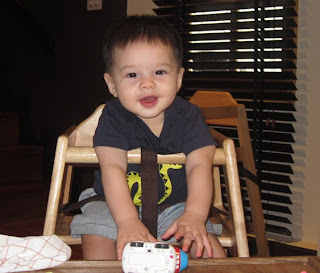