Having a baby’s photograph taken at a studio for a passport photo must be one of the hardest thing to do. I mean, the poor little 4-week old bugger cannot even lift up her head, yet all these government bodies will insist that passport photos HAVE to be taken in a certain, specific way. Nooooo…visible parental hand support will not be accepted in any way. If the head appears too big, the image will be rejected as well. And oh! better get that background colour right too!

After having the first set of photographs rejected, we were sent off to a nearby make-shift photo studio to make yet another set of photos for Spud. Trust Spud to give us an absolutely wonderful experience to the whole thing.

Of course she was asleep, and so had to be woken up for her photo to be taken.That did not make her happy (i.e WAIL!). Of course she then decided that she was hungry and needed to be fed (More massive wails). As she is now being exclusively breastfed, I had no choice but to whip out those titties right there at the shed which happened to be the size of 4 toilet cubicles joined together. Spud took her own sweet time with her all-you-can-eat buffet and of course she had to fuss about while at it, extending her feeding time to eternity. And of course, after that, she HAD to have a wet diaper (Another major WAIL).During the transition of  changing the wet diaper to a fresh one, she figured it would be fun to just pee away for all sundry to see. There we were scrambling away to stop the pee fountain from spreading out further as this was happening on the counter of the studio as there really was little room at that tiny shop. Right after changing her wet diaper, she then decided to honour us with her stinking explosive poop and filling up her just changed diaper to the brim. She rewarded us with a priceless “oh-that-was-a-divine-crap” look.

They somehow managed to get a decent picture of her in between those frantic moments. Believe it or not, this took all but just ONE entire hour! 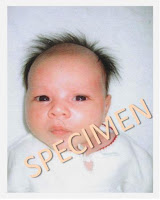 An interesting day indeed. The adventure has just begun.