Yes, my friends. That elusive Peppermint Mocha has finally re-appeared after 2 years of hiatus from the market. It was such a great beverage that I was surprised, not to mention very disappointed when they took the beverage off their list during the year end season for several years!

There’s definitely something about this Peppermint Mocha drink. I’m so, so, so addicted to it that I would not mind having it every day if I can.

Just to be clear, I’m not exactly a big supporter of Starbucks. I think they are over-priced, a bloody rip-off, and I have known of better places that serve much better coffee than Starbucks ever did for a third the price. However, there are 2 things I can’t quite find anywhere else as easily; and so patronising Starbucks is just a matter of convenience:

I have been waiting for this particular drink to make a comeback for ages! And, I have yet to find another place that serves better Peppermint Mocha at half the price. So, in this case, it will my exception to the “no Starbucks coffee” rule.

Ahh! Peppermint Mocha. Have it cold or hot and I still think nothing else beats the splendour of this minty drink for that festive, year-end feeling. I can smell that holiday feeling already!
And, NO. I.am.not.sharing.my.cup. 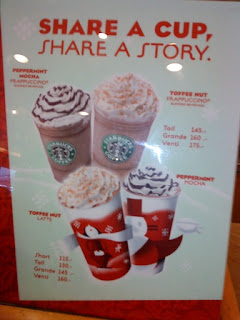