A week on, and it felt like it was ages ago since we arrived in Holland. We have been told time and again that we were very lucky with the weather. To top it all, we were certainly spot-on with the timing of the tulips. Holland really was at its prettiest.

Spud wise, despite her tantrums every now and again, she actually did OK overall. What surprised me was the fact that she managed to sleep through the night for a full 12-13 hours straight since the first day we arrived. This is despite of being in strange rooms, strange beds and strange places. Of course, there were nights when she woke up crying, but they were not that frequent. Most often than not, she’ll fall back to sleep almost immediately. Or if she didn’t, we’ll go comfort her and she’ll then lulled back to sleep almost immediately.

I was right when I predicted an April Fool’s thought that she is likely to be pulling a fast one on us with her teething. My timing prediction may be off, but she did cut some teeth alright. The day before we left, I discovered that she cut 4 teeth — 2 at the bottom went through, and 2 at the top were almost through. At least we now know that her out of ordinary crankiness and superbly smelly poo in the first few days of the trip could easily be attributed to the fact that she started teething. That being said, I certainly was not looking forward to the flight back home. But like I said, it was all ain’t as bad as I thought it would be.

Although the first night home was pretty rough, and she has seemed pretty wrecked in the day for a few days (jet-lagged!), I am glad to report that apart from that wretched night, Spud has had no problems sleeping through on the subsequent nights after (and until now, more than a week later!). I count my blessings for that. I reckon, it helps that Spud is such a lousy napper in the day and in this case, it works in our favour that she fights sleep in the day time, only to crash completely at night. I cannot be more thankful.

As a family, this is really one time where we spent a lot of time together. And because we did, I am surprised that I could literally see Spud growing right under my nose. She certainly is different now as compared to the time before we left for Holland. It is fascinating. I cannot believe how fast she has grown. It felt amazing!

As I got busy being a corporate slave this week, I begin to realise one thing:  I miss spending loads and loads of time with Spud.

Me being me, I thought, I would “OD-ed” on my daughter during the vacation because she is usually so intense. While that is only partly true (one can have a melt-down if she is cranky for hours and days on end), I now know that I would hate to be apart from her for too long.

As Spud slept soundly in the crib in her own room in the last few nights since we got home, I realise that I miss her already and that I’m looking forward to spend some time with her the next day. It does feel extremely fulfilling to be able to devote so much time and energy to this little person who is slowly developing her own personality right before your eyes.
I did not believe it then when people say that I wouldn’t know what it’s like until I have one of my own.  I know better now. I should know;  my mothers told me so.

I guess such is family life and it is finally sinking in. 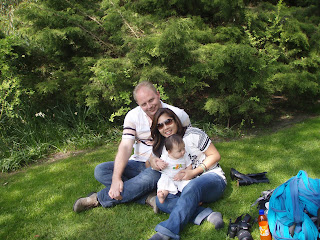