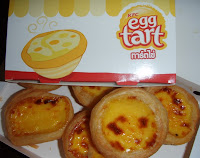 KFC Thailand has recently launched their version of egg tarts.

Who would have thought that KFC would go for such a thing. I mean, fried chicken and tarts are like 2 worlds apart and egg tarts would be the last thing I associate KFC with! But lo and behold! There they go producing egg-tarts in massive numbers, selling them at 25 baht per piece. Could it be a chicken and egg situation? We live in a funny little tartlet world.

To be fair, they taste pretty yummy, and in my opinion, taste quite similar to the Portuguese Egg Tarts I used to be crazy about.

It is of no surprise that these egg tarts are now in my repertoire of must have food. At this stage, I just can’t have enough of them. They are so heavenly and check out the top; all crusted out ala Crème Brûlée. 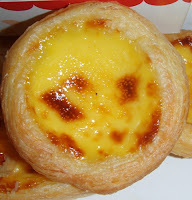 I know I always have the tendency of over-eating something I like way too much. I wonder how long before I’ll get all egg-tarted out.