It’s official. Donut is a closet bully in our family!
Funny that while we have speculated on this notion for a while, we could confirm this discover only recently when he started to show who is boss.
He has always been this meek, mild and has somewhat shy demeanor. He has been this one cat that would go out of his way to make himself inconspicuous to strangers, does not like attention, and most often than not, apart from being Fudge’s best friend, he will, most of the time, make himself scarce from the “public eye”. He also has got the softest yet squeakiest voice a cat could ever have. He is not aggressive and is actually quite the scaredity cat. He would jump out of his skin if he could whenever he got startled by something or someone. He does not like to be held or cuddled, and he snuggles up only on HIS terms. He sometimes sit near you, but far enough that you can almost not reach him with your fingertips. He has his favourite human (me!) and is absolutely not demanding at all. He is actually the only one of the three cats that (we think) embodies the character of what a real cat should be, and so, for all those traits, it is actually hard to imagine that he is actually the alpha cat of the brood.
So what has Donut been doing for us to conclude that he is a closet bully?
I think him being so skittish is just a facade. For some reason, whenever we hear one of the cats growling away, we’d be sure to find Donut either cornering Andy such that she does not have an exit or, that he has his paws firmly placed over Fudge’s head or his claws and/or jaws on her neck. He would look so calm as if it is the most natural thing to do, but we can tell that the 2 cats did not like it very much. They would moan and growl and finally bow down into submission.
Looking at how the scene usually pans out, I’m sure it is Donut’s way of telling the other 2 cats not to mess with him. Sometimes, it just seems like he picks on them, just because.
For a moment, there’s this certain respect for this cat who effectively knows how to show who is boss without being too bossy about it.
And then, you suddenly found him staring stupidly at the screen saver of moving bubbles on the computer for a long, long time. And that makes you laugh to bits, making you forget for a moment that he is actually quite the bully!
Cats can be so amazing. 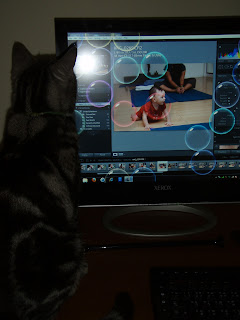