Almost every Thai person I know has a nick name and those that came without one is actually quite rare and far between. That being said, if you are being introduced to a Thai, chances are, you will be introduced to them by their nick names – and hardly ever by their real names.The nick-name concept can sometimes get lost on most foreigners, but for the Thais, this is a norm.

Nick names are given at birth by their parents and Thai’s real names are often long and unpronounceable – try Somchaiwarapon Kanavasathanasupornsiri. OK; I made that one up on a fly, but I won’t be surprised if there actually is somebody by such a name. That being said, one can understand why a nickname is then necessary…

…although, in the western world, one could argue that such long names are probably not necessary!

But that was not the point I was trying to make.

I have been so exposed to the different types of Thai nick names I have come across in the last few years that I don’t think the concept of nick names are that strange anymore. In fact, whenever I get a business card from a Thai business associate, I make it a point to ask what their nick names are so I could write it down next to their long names as no one really calls them by their real names, even in formal meetings. (It is strange that most don’t have their nick names printed on their name cards.  It gets trickier when you try to send them an email and their email addresses are usually very long and does not come with their nick names!)

Thai nick names vary from the more common ones like Nhok (Bird), Kob (frog) and Lek (small) to name a few; to weirder ones that had me scratching my head as to why they would want to name their kids with names like Piano, Pineapple, Prik, Cucumber,  Poo (crab) and (god help the child!) Twat.

From the eyes of a farang (foreigner), the names these kids are saddled with can sometimes be mind-boggling. They seemed to also change with times as I have heard my colleagues nick naming their child with Skype, Note or (Black)Berry.

It gets weirder when the spelling does not quite match up to the pronunciation as in the case of Ble (pronounced as Burn) and Ple (pronounce as Pen) – largely because the “L” sound on the end of a word is pronounced as an N in Thai. So, things like Apple would most definitely be (deliberately) mispronounced as “Appen”. Don’t ask me why.

But I almost died from not being able to burst into laughter when the lady behind the counter whom I ordered my drink from had a name tag on her shirt that spelled “Google”.

This was my best stealth shot of her. 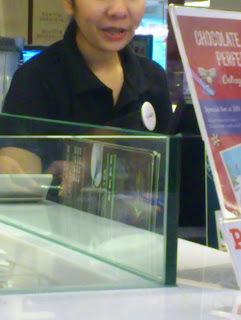 My bet is she must not have had that name when she was born and had probably only changed it recently to suit her whims and fancy. (Thais are also quite notorious for changing their names like they change their shirt)
The world of Thai nick names are just getting weirder.