Be gone thy Omeprazole. Let there be light with Lansoprazole!

Squirt’s former reflux medication, Omeprazole has now been switched to a different one several weeks ago. The switch in medication largely stemmed from us complaining that it was quite hard to administer Omeprazole to Squirt without those little tiny balls going down the wrong pipe.
According to our doctor, Omeprazole and Lansoprazole (also known as Prevacid) are actually the same stuff. I was told that the difference is largely for “business purposes”. That is to say, Lansoprazole is just the upgraded version of Omeprazole where “they add another molecule to the medicine to make it better and longer lasting”.  And, the only reason we were prescribed with Omeprazole in the first place was because of its extensive experience in infants.
With Prevacid, we can now administer the medication with ease. For one, the tabs dissolves in water and the little beads that can be found in each tab are much, much smaller – perhaps only about one-tenth of Omeprazole’s.  That makes our job easier as we only need to mix it with about 1-2 ml of water, suck it up into syringe and administer it to Squirt. Those little beads in Lansoprazole should not dissolve. They have a hard coating to protect them from stomach’s acid until they can do their job when they finally settle into stomach-land.
The Prevacid solutabs should be administered on an empty stomach and 30 minutes to 1 hour before a full meal – which usually means we have to  endure a  little bit of wailing before Squirt can have his feed. Prevacid is also strawberry flavoured which makes the taste a little bit more pleasant for Squirt.
Although we can’t be sure if the switch of medication was the culprit, Squirt did have 2 bad nights of continuous refluxing right after the switch to Prevacid. That surprised us, and after some research and checking with our doctor, we were told that there should be no lag in effectiveness given that Squirt has already been on Omeprazole and that Lansoprazole is effectively the same medication, but just better. We don’t know why that was, and still could not find the answer to that. We suspected though, he may have just had some form of stomach cramps – a possible side effect from either.
Despite all that medication, we also found out the hard way on a separate occasion, that vaccination triggers reflux. We had not been fore warned or told that; you read it here first. And so, after 24 hours of Squirt’s 2nd month cocktail of vaccination, he had another bizarre attack of reflux which got him cranky for several days on end and kept us up for several nights. Thanks to Google, at least we now know that is something to watch out for when he is due for his next vaccination! 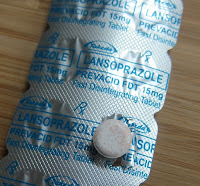 The good news is that Squirt’s reflux seems to be in control for now; well, at least the pain from his reflux is. He still spits up and sometimes swallows it all back down. But it has been a far cry from what he used to have.

Squirt has since been a very different baby. Let’s hope that we can maintain this.